Iraq’s parliament has officially named Haider al-Abbadi as the country’s new prime minister and approved most of his proposed Cabinet, as the country battles to take back territory lost to the Islamic State group.

Legislators on Monday approved all of the candidates proposed for Iraq’s new government, with the exception of two posts, namely the defence and interior ministers. Al-Abbadi requested an additional week to name them.

The US and other countries have been pushing for a more representative government that will ease anger among Sunnis, who felt marginalised by al-Maliki’s administration, helping fuel the dramatic sweep by the Islamic State armed group over much of northern and western Iraq since June.

Speaking before parliament, Al-Abbadi vowed to “back the military operations in all the areas of confrontation against the armed gangs and the forces of terrorism and ensuring their continuation till victory is achieved”.

“My government is committed to solve all suspended issues with the Kurdistan Regional Government,” he said in a speech outlining his proposed government programme.

The Kurdish political bloc had debated for hours on Monday whether or not to participate in the government as the session began, and no Kurds had initially been present at the meeting aside from President Fuad Masum.

After the parliament session began, the Kurdish bloc walked in and registered their names.

The Kurdish region and Baghdad are at odds over various long-running disputes on issues including territory and the country’s vast oil and gas resources.

Relations between the two sides worsened considerably this year over what the Kurds said were late and insufficient payments by Baghdad to the region, which saw salaries in Kurdistan go unpaid.

Iraqi and Kurdish forces, backed by US fighter jets, are currently fighting in Iraq’s north to retake towns captured by the Islamic State group. 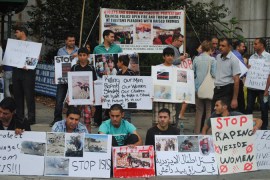 Persecuted by Islamic State, ethnic Yazidi in the US call on the international community to help their families. 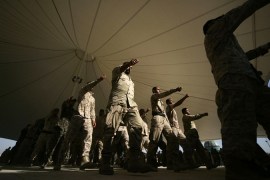 An Iraqi soldier recounts fleeing an Islamic State group massacre in Tikrit, where at least 560 soldiers were executed. 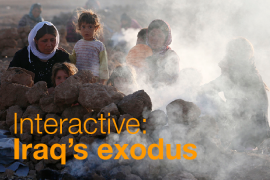 An overview of the religious and ethnic groups forced to flee from the Islamic State group’s advance.