Iron Dome is arguably one of the most talked about defence systems in the world.

Israeli officials say the defence “shield” is able to detect an incoming rocket, determine its path and likely point of impact, and intercept it if it poses a threat to Israeli towns or cities. Some rockets land in empty fields, while others are shot down by a battery of Tamir interceptor missiles.

Israel claims that of the purported 3,500 rockets fired from Gaza during its latest military operation, 90 percent of those that would have hit population centres were neutralised by the Iron Dome system.

But experts outside of the country have questioned the efficiency of the system. “‘In order for Iron Dome to have any chance of detonating the rocket warheads, it must engage from the front, in what is called an Inverse Trajectory,” wrote Richard Lloyd, a warhead designer, in a recently declassified 28-page technical report obtained by Al Jazeera.

In other words, the Iron Dome missiles must approach rockets head-on, or the probability of intercepting them drops to virtually zero. This is due to the nature of the interceptors’ warhead, which is not in the nose of the missile but a third of the length down.

When very close to its target, the interceptor will detonate, sending a shower of steel rods out to the side of the missile to destroy the rocket. The only way these rods can successfully hit a rocket warhead is when the interceptor comes up to meet the rocket and passes just by it. Attempting to hit the rocket side-on will have virtually no chance of success. 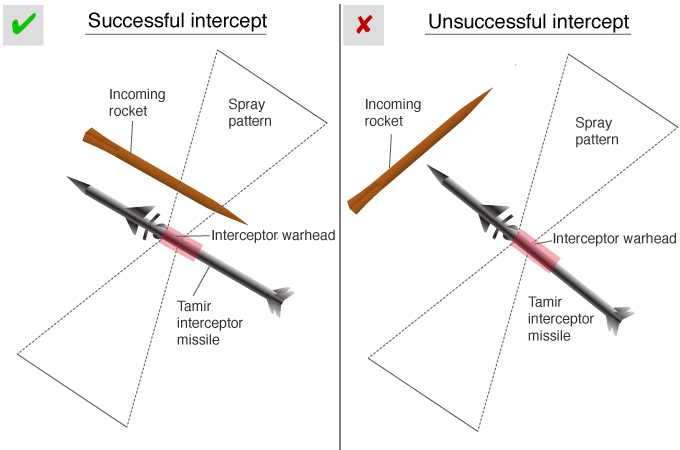 Theodore Postol, a professor at the Massachusetts Institute of Technology (MIT) and missile defence expert, headed a group that assessed the effectiveness of the Patriot missile defence system installed in Israel at the end of the first Gulf War. While figures at the time reported a resounding success – Postol told Al Jazeera that although officials claimed that 94 percent of Scud and al-Hussein missiles were shot down – he estimates the real figure was “probably zero”.

Postol, a vocal critic of the Iron Dome, has based a portion of his research on open source pictures and video of the Iron Dome’s Tamim interceptor contrails, the visible smoke path left by a missile. He told Al Jazeera that these showed “that 80-90 percent of the time, the Iron Dome [missiles] are not even close to the correct engagement geometry”, and added that the Iron Dome system is not engaging rockets head-on and therefore not working as it should.

Postol said the video evidence of the contrails is damning; not because it might show a successful rocket detonation, but because it shows the sudden changes in course made when the interceptor realises it is not on a direct path to the incoming rocket. The contrails show the Tamir interceptor attempting to engage the rocket side on, with a success rate of virtually zero.

A report written by Yiftah Shapir, of Israel’s Institute of National Security Studies, contradicted Postol and Lloyd’s findings, however. Shapir said the majority of the video evidence Postol examined was not filmed in a scientific manner, and said that several of the clips could be of the same event, filmed from different angles.

“There is no way that a smartphone camera could distinguish between a double and a single explosion,” Shapir wrote.

But Lloyd argued that even when the rockets are being intercepted, they aren’t necessarily being neutralised. The warheads contained in Palestinian rockets are “very difficult to detonate because they are made with thick steel cases… backed with insensitive TNT explosive”, he found.

OPINION: A war to market the Iron Dome

Israel has reported that each interceptor missile costs $50-90,000, but Postol has suggested the real cost was closer to $200,000 or higher, basing his estimate on the $400,000 price tag for each Sidewinder missile, an air-to-air missile that resembles the Iron Dome interceptors in basic architecture and manufcaturing processes.

Still, Israel has benefitted from some $225m in additional US cash assistance for Iron Dome technology during its latest Gaza offensive. The US had originally pledged $351m to fund the system in the fiscal year 2015.

“Iron Dome has intercepted most of the rockets it has fired at our cities. We have invested considerable capital in it and it is proving itself,” Israeli Prime Minister Benjamin Netanyahu said on July 20.

It shows that Israel has been caught up in a PR cycle of its own making. In order to contend that it faces an existential threat, it has to sell the 'thank God we have Iron Dome' theme.

But Jeremy Binnie of IHS Jane’s Defence Weekly has alleged that “Iron Dome is intercepting a significantly lower proportion of rockets than 2012”, during Israel’s last large-scale military offensive on Gaza. Biddle said this is probably because “the system has been improved and can ignore more rockets that aren’t a threat”.

“We don’t know how the [Israeli army] is defining what is a ‘successful’ intercept. Is it counting every time a rocket is hit, or every time its payload is destroyed? There is a big difference,” Binnie told Al Jazeera.

Four Israeli civilians – Israeli citizens, and a Thai worker – have been killed so far in the Gaza war. However, fewer civilians were killed during the 2008-2009 Israeli offensive in Gaza, dubbed Operation Cast Lead, before the missile defence system was operationally deployed.

It’s “not that the [Palestinian] artillery rockets pose no threat of injury or death to the targeted population, it is simply that each artillery rocket is not especially destructive. As a result of this, early warning and sheltering are extremely effective against such attacks,” Postol said.

Despite all the questions regarding the Iron Dome’s efficiency, the system is attracting interest from foreign buyers, namely India and South Korea. Shir Hever, an Israeli political economist, told Al Jazeera the Israeli government was using the Iron Dome “to avoid the need to engage in diplomacy”.

“The idea that technology can replace political work is an idea which the Israeli arms industry is promoting (and the Israeli politicians are very much eager to buy), and this is exactly the idea which makes Israeli arms attractive to other governments,” Hever said.

Mark Perry, a political analyst based in the US, added: “It shows that Israel has been caught up in a PR cycle of its own making. In order to contend that it faces an existential threat, it has to sell the ‘thank God we have Iron Dome’ theme.”