Kuala Lumpur, Malaysia – Malaysian opposition MP Lim Kit Siang might be wondering how long before the police arrive, after he released a statement on Tuesday asking if the government had “gone bonkers”.

It is a question many might be asking after the latest arrest on sedition charges on Tuesday of prominent University of Malaya law lecturer Azmi Sharom.

His crime? Writing a newspaper opinion piece about a political crisis five years ago in the state of Perak.

Sharom’s detention brings to nine the number of people who have been arrested this year on what observers are calling “selective prosecution”. Most are opposition politicians.

The late politician and lawyer Karpal Singh was convicted of sedition in February this year.

Opposition MP Tian Chua, whose trial continues on Wednesday, was charged with the same offence in March.

In May, MP Teresa Kok was also charged after she released a satirical New Year video, which poked fun at the government.

More recently, state assemblyman RSN Rayer’s name was added to the list of those on sedition charges after he was heard commenting “UMNO celaka” which translates as “damn you UMNO”.

UMNO is the main ruling party in Malaysia and has been in power since independence 57 years ago.

The sedition law is a hangover from British colonial rule and one which Prime Minister Najib Razak promised to abolish in 2012. Yet two years later there has been no attempt to strike it from the statute book.

Sedition is defined under Malaysian law as speech which “would bring into hatred or contempt or to excite disaffection against” the government.

It is hard to see how a satirical video could incite “hatred or contempt” in the government, other than to point out their failings, or a mild anti-government curse could be thought to be a unique comment.

But it was Sharom’s arrest on Tuesday that has generated the greatest condemnation.

“Have Malaysia’s academic freedom in the universities degenerated to a state where law lecturers cannot give their opinion about ‘right and wrong’ about legal cases?” Lim Kit Siang said.

A view echoed by Kian Ming Ong, who said Sharom’s arrest was a “cowardly attack on academic freedom”.

“To charge Professor Azmi for expressing his academic opinion … is mind boggling,” he said.

There are many opinions about the reasons for the apparent political crackdown.

But if all the MPs are convicted of sedition and their appeals fail, they will be forced to step down from office and by-elections held.

They would also be barred from office for five years after any sentence is served.

The threat of that alone could unsettle the opposition coalition led by Anwar Ibrahim, which observers suggest is the real reason behind all the arrests. 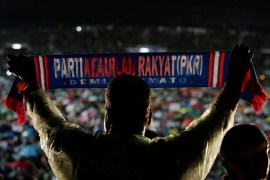 Sedition Act comes under heavy criticism from human rights groups describing it as a means of oppression.