Houthi rebels in Yemen have raided the houses of a powerful military commander and his allies in the capital Sanaa.

The raid on the home of Ali Mohsen al-Ahmar, an adviser on defence and security affairs for the president, came a day after the signing of a UN-brokered peace deal between the government and the Shia rebel group.

Sources told Al Jazeera that the gunmen entered the house in the Hadda neighbourhood overnight to Monday and looted it after exchanging fire with the guards. Several security personel were injured in the incident.

The house of Hamid al-Ahmar, the leader of the Yemeni Alliance for Reform party, was also looted.

Meanwhile, Shia rebels held position around key government offices and army bases in Sanaa, which they captured without resistance just hours before the signing of the peace agreement.

Jamal Benomar, the UN envoy to Yemen, told Al Jazeera on Monday that the actions of the rebels were undermining the success of the deal.

“The deal calls for immediate ceasefire. It means that all hostilities must cease. It also means that all the armed groups that are now in the city taking over government buildings must leave,” said Benomar.

The interior ministry had called on the security forces on Sunday not to confront the rebels.

Sanaa mayor Abdulqader Hilal resigned in protest late on Sunday after rebels seized his car at a checkpoint, sources close to him said.

The deal, that calls for the formation of a new government within a month, is aimed to bring an end to weeks of clashes and protests that have crippled the capital.

President Abdrabuh Mansour Hadi is also required to appoint advisers from the Houthis and southern separatists within three days.

More than 100 people have been killed since the violence erupted on Tuesday, according to security officials.

The rebels hail from the Zaidi Shia community, that makes up 30 percent of Yemen’s mostly Sunni nation but the majority community in the northern highlands, including the Sanaa region.

The rebels have battled the government on and off for a decade from their stronghold of Saada in the far north. 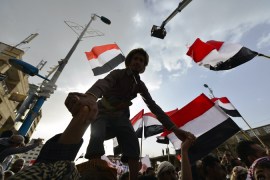 Will Yemenis honour the new deal?

Yemen’s warring factions finally sign a deal, but will it hold? 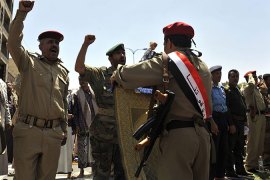 Is the ongoing unrest part of the post-revolutionary growing pains or the death throes of the transition to democracy.