Indonesia is preparing cloud-seeding operations in an effort to combat a haze of air pollution blanketing neighbouring Singapore.

Pollution levels were “moderate” levels on Tuesday morning, according to the pollution standard index, a day after hitting “unhealthy” levels. The worst affected parts of the island are in the west and closest to Indonesia.

The haze has become an annual event in this part of Southeast Asia, as farmers illegally burn forest or plantation areas to clear land.

Singapore’s national environment agency has warned the elderly, young or those with chronic lung conditions or heart disease to avoid prolonged or strenuous outdoor activity.

Indonesia has in previous bouts of haze attempted to seed clouds, to create rain storms that can damp down fires and pollution.

The pollutant standards index measures six types of air pollutants including fine particulate matter which can be easily inhaled and cause breathing problems or asthma.

At least 200 hotspots have been counted in Sumatra by Singapore’s meteorological service with as many as 300 in Indonesian Borneo.

The haze was the worst since 1997-98, which was estimated to have cost Indonesia $9bn.

YP Choo, a Singapore resident, told Al Jazeera that Singaporeans had learned to live with the choking smog each year.

But she said: “It would be nice to have it go away for good. The annual burning of forest area in the region has been blamed but I do hope the authorities can do something about it before we lose our health.”

Companies can be fined up to $1.5m if  found guilty of causing or contributing to smog on the island.

“We are targeting the commercial operators who directly or indirectly are causing, or contributing to, or condoning activities which lead to transboundary haze,” Vivian Balakrishnan, the environment minister, told parliament last month.

This latest haze is the first opportunity Singapore has to test its new law.

Eugene Tan, an associate law professor at Singapore Management University, told Al Jazeera: “It is realistic to have the legal threat given that some of the companies that have business interests in the plantations and other agricultural lands are listed on the Singapore Exchange and / or are based in Singapore.

“The Singapore government had to be seen to be doing something about the annual threat. The law will, at the very least, compel Singapore-based companies to exercise greater responsibility.”

But Tan conceded land ownership in Indonesia’s Sumatra is complex and Singapore has to tread carefully when pursuing any prosecutions to avoid damaging ties with Indonesia.

He said a solution required cooperation between governments, plantation owners and the public. 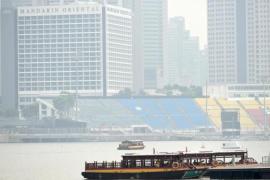 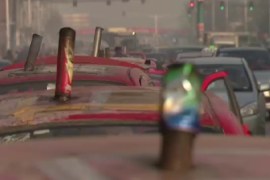 Pollution levels in the country have significantly exceeded the maximum safe limits, WHO says. 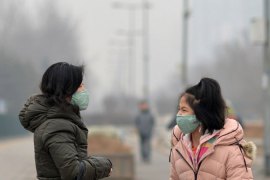 Pollution and unfavourable weather combine to bring more poor visibility and air quality to the north of the country.