Islamabad, PAKISTAN – Anti-government protesters have broken into the building of state television, PTV, in central Islamabad and cut transmissions of the broadcaster’s news services in Urdu and English for 45 minutes.

Protesters, led by religious leader Tahir-ul-Qadri and politician Imran Khan, have been trying to reach government buildings for the last three days. They have been calling for the resignation of Prime Minister Nawaz Sharif.

The South Asian nation’s powerful military said on Sunday that further use of force to resolve an escalating political crisis would only worsen the situation. Pakistan’s army chief Raheel Sharif met Sharif on Monday.

Paramilitary soldiers of Pakistan Rangers have arrived at the building briefly after the occupation and cleared it without any clashes taking place at the scene.

There were no clashes with the Rangers as protesters appeared to listen to them and back down. Rangers are now protecting the building and PTV News is back on air, after being off-air for about 45 minutes.

Before the arrival of the soldiers, local media showed live footage of a crowd of men streaming into the building after breaking through its gate.

Both channels went dark during that time, before having their transmission replaced by another non-news state-run channel called PTV Home.

The opposition leaders, Qadri and Khan, seem to be distancing themselves from the invasion of the building.

“No one, for God’s sake, should enter any building… We are being damaged by this. These are not our people. We will expel whoever has entered these buildings. You should be protecting these buildings,” he added

Shahid Mursaleen, Tahir-ul-Qadri’s spokesman, told Al Jazeera that some people were angry at the pro-government news reporting by the state television.

“They think that they were not reporting the oppression and how people had been oppressed by the government… Qadri said not to enter any buildings, but some protesters just got out of control. We do not approve of entering the buildings,” he said.

Thousands of opposition activists have been camped outside parliament since August 15 demanding removal of Sharif, alleging poll rigging and corruption.

Several rounds of talks between the government and the opposition have failed to avert the crisis that escalated violence over the weekend. 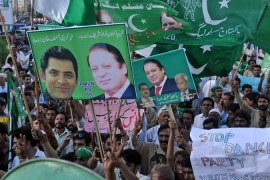 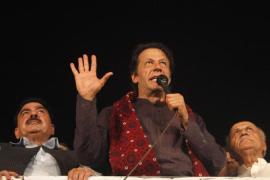 Even if PM Nawaz Sharif survives the current crisis, his government will be permanently weakened. 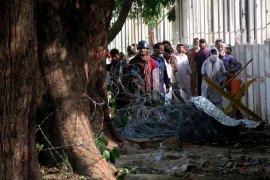 At least three people killed and 494 injured as police clash with protesters calling for PM Nawaz Sharif to resign.