Sectarian tensions have intensified in Iraq after dozens of Sunni Muslims were killed while they were praying on Friday.

The political process to form a new government is in danger and some Sunnis displaced by fighting say they feel targeted by the Shia-led government in Baghdad. 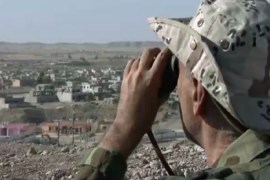