The number of aid workers killed, kidnapped and seriously wounded has reached record numbers, according to new figures published on the United Nations’ World Humanitarian Day.

According to a new report titled Humanitarian Outcomes published by the UN on Tuesday, in 2013, 155 aid workers were killed, 171 were seriously wounded and another 134 were kidnapped.

Preliminary numbers show that 79 workers have been killed in 2014 alone with the months of July and August observing a rise in the level of attacks and incidents involving aid workers including in Gaza and South Sudan.

Overall the figures show a 66-percent increase in the number of victims from the previous year, much of it attributed to conflicting parties deliberately targeting aid workers.

“The reasons behind this increase in deaths can be explained by the facts that warring parties in several ongoing conflicts are simply ignoring the rules of war. This erosion of respect for the Geneva Conventions and International Humanitarian Law, at times leads to aid workers being deliberately targeted,” Louis Belanger, spokesperson for the UN on World Humanitarian Day, told Al Jazeera.

The reasons behind this increase in deaths can be explained by the facts that warring parties in several ongoing conflicts are simply ignoring the rules of war.

- Louis Belanger, spokesperson for the UN for World Humanitarian Day

While violence against aid workers has increased worldwide, three quarters of all attacks took place in Afghanistan, Syria, South Sudan, Pakistan and Sudan.

Of the 81 aid workers killed in 2013, Afghanistan is still the country with the highest number of attacks.

“The reality is that there are more conflicts erupting than being solved. Humanitarians are risking their lives in some of the harshest conflicts that are raging on,” Karl Schembri of Save the Children told Al Jazeera.

Every year more aid workers are attacked on the road than in any other setting.

In 2013 alone over half of all violent incidents occurred in the context of an ambush or roadside attack.

World Humanitarian Day itself is a tribute to aid workers worldwide, a commemoration to those who have lost their lives and a celebration of the spirit of humanitarian work around the world.

Globally, there are 108 million people in need of humanitarian assistance and humanitarian organisations require some $17.1bn to meet their needs. 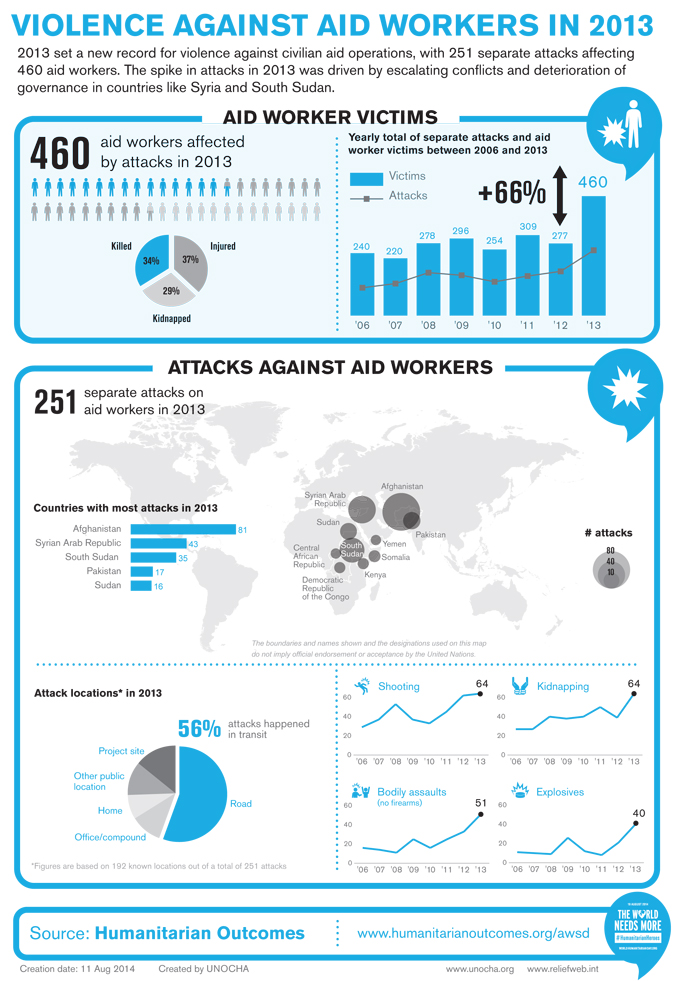