The wreckage of a missing Air Algerie plane has been found, and its black box has been recovered, about 50km from the border of Burkina Faso near the Malian village of Boulikessi, Malian and French authorities said.

“We sent men with the agreement of the Mali government to the site and they found the wreckage of the plane with the help of the inhabitants of the area,” General Gilbert Diendere, a close aide to president Blaise Compaore, said on Friday.

“They found human remains and the wreckage of the plane totally burnt and scattered.”

He told the AP news agency that they went to the area after hearing from a resident who described seeing a plane go down.

A message posted on the website of President Francois Hollande said the wreckage had been clearly identified despite the disintegration of the aircraft.

Terrorism has not been ruled out as a cause, although officials say the most likely reason for the catastrophe that killed all onboard is bad weather.

The plane, designated AH5017 and carrying 116 people, disappeared from radar on Thursday over northern Mali while on a flight from Burkina Faso to Algeria. It was carrying mainly French and Burkina Faso citizens.

Among those who were killed were 10 people from the same family with roots in France’s eastern region, local officials in Lyon and relatives said Friday.

Earlier, Francois Hollande, said his government would use “all military means” in Mali to help in the search for the plane.

Two French fighter jets were among the aircraft, which scoured the north of Mali for the wreckage. France has hundreds of troops stationed in Mali after defeating an al-Qaeda-linked rebellion last year.

The flight, scheduled by Air Algerie and operated by the Spanish private company Swiftair, was flying in heavy rain, according to reports.

A French aviation watchdog said the plane was checked “two or three days ago” and was “in good condition”.

Patrick Gandil, the head of the French civil aviation authority, said the plane passed through Marseilles days ago.

“We examined it and we found almost nothing, it was really in good condition,” he said.

The flight path of the plane from Ouagadougou in Burkina Faso to Algiers was not immediately clear. Ouagadougou is in a nearly straight line south of Algiers, passing over Mali where unrest continues in the north.

Northern Mali fell under control of ethnic Tuareg separatists and then al-Qaeda-linked fighters following a military coup in 2012.

The French-led intervention in 2012-13 scattered the al-Qaeda groups, but the Tuaregs have pushed back against the authority of the Bamako-based government.

A senior French official said it seemed unlikely that fighters in Mali had the kind of weaponry that could shoot down a plane. 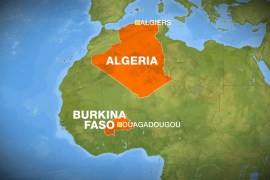