President Goodluck Jonathan has met for the first time some of the parents of 219 kidnapped Nigerian schoolgirls and dozens of classmates who managed to escape from their Boko Haram captors.

Jonathan assured them on Tuesday of his determination that those still in captivity “are brought out alive,” presidential spokesman Reuben Abati told reporters after the meeting.

Some of the girls described their escapes and Jonathan gave assurances that the education of the girls and their still-captive classmates would not suffer in any way, Abati said.

“Mr. President reassured them of the federal government determination and his personal determination to ensure that the girls that are still in captivity are brought out alive. He made it clear that is the main objective of the government,” the Associated Press reported Abati as saying.

The parents emerged from the closed door meeting without showing emotion but some shook hands with the president. Some of the escaped schoolgirls smiled for photographers after the meeting.

Journalists were prevented from speaking to the girls and the parents by Nigerian security.

The delegation of 177 people met with Jonathan, said Lawan Abana, spokesman for the community of Chibok, the town where the schoolgirls were kidnapped.

At least 11 of the parents have died since the kidnappings – seven in a village attack this month and four of heart attacks and other illnesses that the Chibok community blames on the trauma, according to residents.

Jonathan was accompanied in the meeting by the ministers of education and finance, and his national security adviser. Also present was the Governor Kashim Shettima of Borno state, from which the girls were abducted.

Shettima has accused Jonathan of not doing enough to save the girls and has angered the government with his charges that Boko Haram fighters are better armed and motivated than Nigeria’s military.

Tuesday’s meeting came after some parents refused to meet Nigeria’s leader last week. For months the parents have been asking to see the president and he finally agreed to a request from Pakistani girls-education activist Malala Yousafzai, who had met with the parents.

The failure of Jonathan’s government to rescue the girls has prompted an international campaign and daily #BringBackOurGirls rallies in Abuja, the capital, to ensure attention for the girls’ plight.

Some of the parents and community leaders of Chibok have made public statements urging Jonathan to negotiate with the girls’ captors.

Boko Haram is demanding a swap for detained fighters in exchange for the girls. So far, Jonathan has refused.

Nigeria’s defence ministry, also criticised for not quickly rescuing the girls, has said that it knows where they are being held but that it fears any military campaign could get them killed.

Jonathan has never before met with the parents or the escaped girls, though he insists repeatedly that “My priority is the return of these girls.”

In May, he cancelled a planned trip to Chibok without explanation. 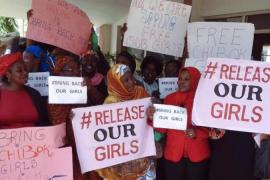 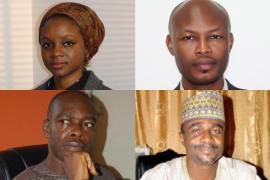 Why has Nigeria failed to contain Boko Haram? 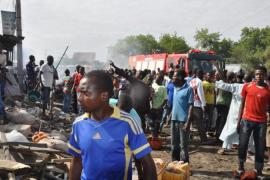 Boko Haram and the competing narratives

Political elites in Nigeria trade accusations over who is responsible for the failure to stem Boko Haram’s violence.