President Petro Poroshenko summoned security officials in Kiev to discuss Friday’s pre-dawn attack at the Zelenopole border post near Luhansk, and declared that the perpetrators would be punished.

“For every life of our soldiers, the militants will pay with tens and hundreds of their own. Not one terrorist will evade responsibility, everybody will get what is coming to them,” he said.

Vladislav Seleznev, a Defence Ministry spokesman, gave the figure of 19 deaths on his Facebook account and reported four other troop deaths.

The ministry said 93 soldiers were injured in the base clash.

The other four soldiers and five other people were killed in Dovzhansky, which is also near Ukraine’s border with Russia.

Two soldiers and at least one border guard were killed after their armoured vehicle drove over a mine.

The Russian news agency Interfax also reported that another Ukrainian soldier was killed in attacks near Aleksandrovsk in the Luhansk region.

Vladyslav Seleznyov, a military spokesman, said a soldier was also killed in an incident near the town of Karlovka in the region of Donetsk, the main city where rebel fighters are holding out against the government forces.

He said at least 50 separatist fighters had been killed in the last few days following air attacks against rebel positions near the border with Russia.

The dead also included five coal miners who were killed on Friday after the bus they were travelling in came under mortar fire, Ukrainian television reported a doctor as saying, in the region of Chervonopartizansk near the border with Russia.

The shelling of the bus forced energy and coal processing company DTEK, which employed the miners, to suspend operations at four mines in the economically depressed industrial province of Luhansk, Interfax news agency quoted the company’s general director as saying.

The government forces have gained the upper hand in the three-month-old conflict in the Russian-speaking eastern regions in which more than 200 government troops have been killed as well as hundreds of civilians and rebel fighters.

Russian news agencies on Friday quoted Vasily Malayev, a spokesman for the security services in the Rostov region, as saying that three crossings east of Donetsk were temporarily closed late on Thursday night because of fighting on the other side.

Ukraine said it regained control of one crossing which had been controlled by rebels. 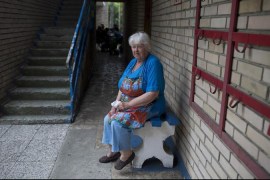 Number of people displaced by conflict in eastern Ukraine has skyrocketed in past few weeks. 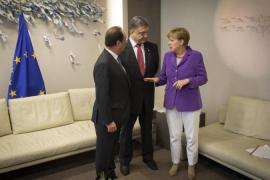 What will Ukraine gain from its EU deal?

It triggered months of unrest, but Ukraine has signed an economic agreement with the EU in Brussels.