They said fighters fought their way on Thursday into the base on the edge of Muqdadiya town, 80km from the capital.

The northern side of the town was already under their control before Thursday’s clashes.

The area around Muqdadiya has seen sustained fighting in recent weeks since fighters led by the Islamic State group, an offshoot of al-Qaeda, seized the northern city of Mosul and swept south towards Baghdad.

The security source said the rebels on Thursday included hundreds of non-Iraqi Arab fighters, heavily armed and some riding in tanks.

Negotiations were under way involving local tribal sheikhs for a truce, the source told AP.

A local official confirmed the fighters had breached the site, although he said they would be repulsed.

“They were able to control part of the base but we will retake it from them,” he said.

A military spokesman was not immediately available to comment, AP said.

In another Iraqi development on Thursday, Kurds declared that their politicians would boycott cabinet meetings and authorities in Baghdad suspended all cargo flights to the semi-autonomous Kurdish region.

The move is largely symbolic, since the government has continued operating in the past when the Sunni bloc fully withdrew its ministers from the cabinet. But it underlines the deepening split between al-Maliki and the Kurds.

Later on Thursday, Iraq’s civil aviation authority in Baghdad suspended all cargo flights to the Kurdish region until further notice.

The head of the aviation authority, Nassir Bandar, said the decision was taken “due to the security situation and [events] in Mosul where it is not possible for us to handle shipments”.

He said passenger flights to the airports to the cities of Sulaimaniyah and Erbil in the Kurdish region will not be affected.

Separately, the UN’s nuclear agency said atomic material has been taken from a university in Iraq in a region controlled by the Islamic State group but that it does not present a health, safety or proliferation risk.

The International Atomic Energy Agency, in Vienna, Austria, described the material as “low-grade” and said its removal from Mosul University does not translate into a “significant” danger of any kind.

The agency said it was notified by Iraqi officials of the seizure of the unspecified material and is seeking further details.

The IAEA statement gave no further information about the type or amount of material missing, or who the suspected thieves were. 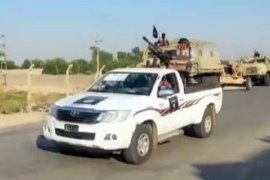 Reports suggest Islamic State group is arresting former Baathists and other rebels who do not share its vision.

A divided Iraq and a fractured storyline 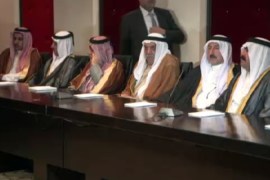 Leaders say they have put aside differences with the Islamic State group to focus on removing Iraq’s government. 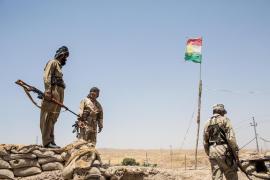 Tens of thousands of families are stuck at checkpoints and refugee camps outside Iraq’s Kurdish region.