Petro Poroshenko, the newly elected Ukrainian president, says fighting in the separatist east of the ex-Soviet country must stop by the end of the week.

“And to do that, we must restore the Ukrainian border so that the safety of each Ukrainian citizen is guaranteed.”

His comments followed a round of talks with Moscow’s ambassador to Kiev and an envoy from the Vienna-based Organisation for Security and Cooperation in Europe (OSCE), and came a day after the 48-year-old confectionery tycoon was sworn into office as the fifth post-Soviet president of Ukraine.

Both fighters and weapons have been crossing into Ukraine’s industrial rustbelt from Russia since shortly after the conflict began eight weeks ago.

Russian President Vladimir Putin issued orders on Saturday for security at the mutual border to be stepped up – a move demanded by both US President Barack Obama and several European heads of state.

In a separate development, Ukraine, Russia and European Commission officials will meet in Brussels on Monday evening to continue talks on how to resolve a dispute over gas prices. 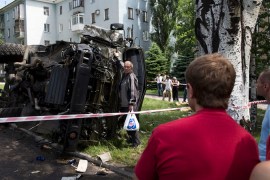 Ukraine’s Donetsk awaits next round of violence after Ukrainian army battles separatists for control of airport. 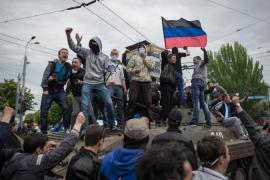 The ‘all-out propaganda war’ in Ukraine

We analyse coverage of the Ukraine conflict, which has often been marred by a lack of nuance, context and subtlety. 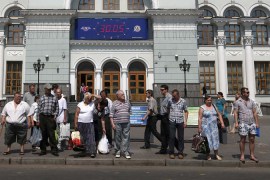