Hassan Rouhani, the Iranian president, has said Turkey and Iran are determined to stand against violence and extremism in the Middle East during a trip to Ankara.

Rouhani made the statement on Monday during a two-day visit to Turkey, where he has discussed nuclear proliferation, the Syrian crisis and trade with his Turkish counterpart, Abdullah Gul.

Iran is a strong strategic ally of Syrian president Bashar al-Assad while Turkey has been one of his fiercest critics, supporting his opponents and giving refuge to rebel fighters.

Rouhani also called on all nations in the Middle East to put effort in achieving stability.

Last year the election of Rouhani, whose foreign policy of “prudence and moderation” has eased Iran’s international isolation. The visit will be the first by an Iranian president to Turkey since 2008.

The visit comes as Iran and six major powers prepare to hold another round of talks on a final deal aimed at ending a decade-old dispute over the country’s nuclear programme.

A preliminary deal was signed in Geneva, Switzerland, in November, under which Iran accepted to halt some sensitive nuclear activities in exchange for partial easing of sanctions.

While deep divisions remain between the two countries over the conflict in Syria, the potential of an Iranian market of 76 million people with some of the world’s biggest oil and gas reserves is a magnet for Turkish companies.

During Erdogan’s visit to Iran in January, a preferential trade agreement was signed aimed at paving the ground to boost trade to $30bn by 2015. 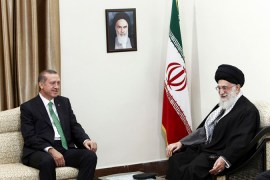 Tensions between neighbouring nations had previously flared over their support for rival sides in Syria’s civil war. 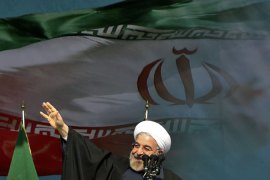 President rejects claims he is sacrificing Iran’s national pride in nuclear talks with world powers including the US.