The victory gives Assad a third seven-year term in office despite a raging civil war which grew out of protests against his rule.

The head of the Supreme Constitutional Court said on Wednesday that the turnout in the country’s presidential election this week was 73.42 percent.

“I declare the victory of Dr Bashar Hafez al-Assad as president of the Syrian Arab Republic with an absolute majority of the votes cast in the election,” Laham said in a televised address from his office in the Syrian parliament.

The opposition and its international backers have denounced the election as a farce, saying the two relatively unknown and state-approved challengers offered no real alternative to Assad.

Voting was held only in government-controlled areas, excluding vast chunks of northern and eastern Syria that are in rebel hands.

Fawas Gerges, a Middle East expert based in London, called the election win a “culmination of Assad’s accumulated victories” since his opponents took up weapons against his regime in 2011.

“The opposition does not seem to be able to genuinely change the balance of power on the ground,” he told Al Jazeera.

“The opposition’s allies – the US and others – have not been as solid and committed as Assad’s allies. Assad’s allies – Iran, Russia, Hezbollah – have fought tooth and nail to keep Assad in place.”

For the first time in decades, there were multiple candidates on the ballot. In previous presidential elections, Assad and before him his father, Hafez, were elected in single candidate referendums in which voters cast yes-no ballots.

Minutes after results were announced, people took to the streets in Damascus to celebrate. State television also showed crowds cheering and dancing in Qamishli in the Kurdish northeast of the country, the Druze city of Suweida in the south and the contested city of Aleppo in the north.

Earlier on Wednesday, the US Secretary of State John Kerry said during a visit to neighbouring Lebanon that the elections were “a great big zero.”

The European Union urged Assad to re-engage in talks, condemning the vote as illegitimate.

“These elections are illegitimate and undermine the political efforts to find a solution to this horrific conflict,” it said in a statement.

Meanwhile, an international delegation led by allies of Assad praised the elections  saying they were democratic and transparent. 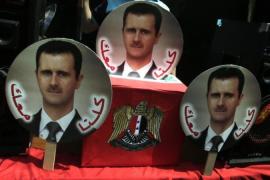 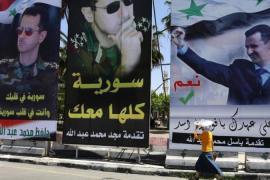 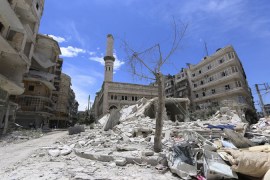 Activist group says at least 54 killed in Aleppo, as regime prepares poll that is expected to return Assad as president. 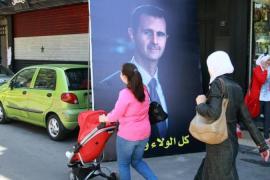 Syria’s vote and the will of neighbouring countries

What’s most telling about the election is not how it turned out in Syria, but the way Assad fared in Lebanon and Jordan.