John Kerry, US secretary of state, has held crisis talks with leaders of Iraq’s semi-autonomous Kurdish region, urging them to stand with the Iraqi government as Sunni fighters led by the Islamic State of Iraq and the Levant (ISIL) advance.

Kerry flew to Erbil, the regional capital, on Tuesday a day after meeting Iraq’s prime minister, Nouri al-Maliki, in Baghdad.

US officials believe that persuading the Kurds to stick with the political process in Baghdad is vital to keep Iraq from splitting apart.

“If they decide to withdraw from the Baghdad political process, it will accelerate a lot of the negative trends,” a senior State Department official said.

Kurdish leaders have made clear that the settlement keeping Iraq together as a state is now in jeopardy.

“We are facing a new reality and a new Iraq,” Massoud Barzani, president of the Kurdistan Regional Government, said at the start of his meeting with Kerry.

Earlier Barzani blamed Maliki’s “wrong policies” for the violence and called for him to quit, saying it was “very difficult” to imagine Iraq staying together.

The five million Kurds, who have ruled themselves within Iraq in relative peace since the US invasion that toppled Saddam Hussein in 2003, have seized on this month’s chaos to expand their own territory, taking control of rich oil deposits.

Two days after ISIL launched its uprising by seizing the north’s biggest city Mosul, Kurdish troops took full control of Kirkuk, a city they consider their historic capital and which was abandoned by the fleeing Iraqi army.

The Kurds’ capture of Kirkuk, just outside the boundary of their autonomous zone, eliminates their main incentive to remain a part of Iraq.

Its oil deposits could generate more revenue than the Kurds now receive from Baghdad as part of a settlement that has kept them from declaring independence.

In an interview with CNN on Monday, Barzani repeated a threat to hold a referendum on independence, saying it was time for Kurds to decide their own fate.

Tuesday’s meeting in Erbil came as the UN said more than 1,000 people, mainly civilians, had been killed in Iraq in less than three weeks.

Saleh said according to medical sources at the Baiji hospital, 26 people – including women and children – were killed and 18 were wounded.

Earlier on Tuesday sources in Salaheddin told Al Jazeera that ISIL had taken control of the refinery, near the town of Tikrit, and were offering Iraqi troops safe passage if they gave up their weapons and left.

The reports were rejected by Hoshyar Zebari, Iraq’s foreign minister, who told Al Jazeera that Iraqi special forces soldiers were in control.

However, the sources said that ISIL rebels had offered 460 Iraqi troops still near the refinery safe passage to Erbil if they gave up their weapons.

The ISIL would then hand the facility to local Sunni leaders, the sources said. 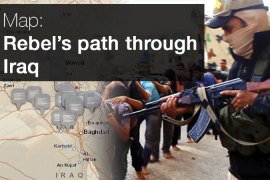 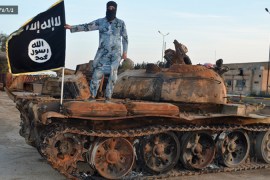 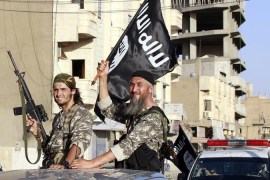