Pakistan says it has launched a “comprehensive operation” against armed groups in the northwestern tribal region bordering Afghanistan, after killing scores of fighters in air raids.

The military said on Sunday the operation would target “foreign and local terrorists” hiding in North Waziristan. The operation was launched a week after fighters attacked Karachi international airport.

“Using North Waziristan as a base, these terrorists had waged a war against the state of Pakistan”, the military said, adding the groups had “paralysed life within the agency and perpetually terrorised the entire peace-loving and patriotic local population”.

“Our valiant armed forces have been tasked to eliminate these terrorists regardless of hue and colour, along with their sanctuaries,” it said.

Troops, artillery and helicopter gunships were involved, according to the Reuters news agency.

The operation was announced hours after Pakistani jets bombed the territory, with the military saying 105 people, mostly Uzbek fighters, were believed killed.

“A number of terrorist hideouts in Degan, Datta Khel in NWA [North Waziristan Agency] were targeted by jets,” it said.

“There were confirmed reports of presence of foreign and local terrorists in these hideouts who were linked to planning of the Karachi airport attack,” it said, a reference to the attack last week that killed 36 people.

Eight hideouts were targeted in the raids, the AP news agency quoted two intelligence officers as saying. The army said that an ammunition dump was also destroyed.

A video seen by Al Jazeera showed widespread damage in the town of Mir Ali.

Abu Abdul Rehman al-Maani, the suspected planner of the Karachi attack, had been killed, the sources said.

The Pakistan Taliban, however, said that those killed were civilians and that it would avenge the deaths.

The air raids were the second time this week the military has hit the tribal regions. Pressure has been mounting on the Pakistani government to launch a ground offensive in North Waziristan against the Taliban.

The US carried out two drone attacks in the region on Wednesday, the first time its controversial drone programme was used this year. 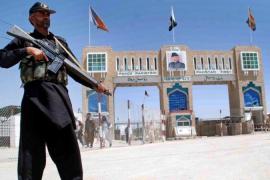 Pakistan clashes drive many into Afghanistan

Hundreds of families seek shelter across the border to escape fighting between government forces and Taliban fighters. 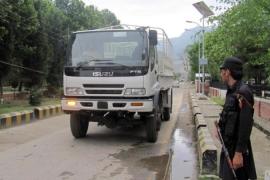 Rise in cross-border attacks leads to suspension of security talks and hostility in relations between Asian countries. 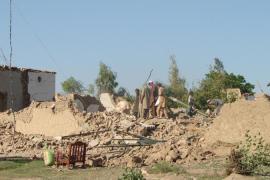 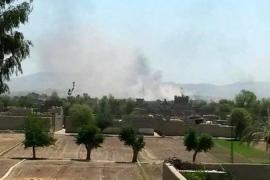