Thai police have fired tear gas and water cannons to push back hundreds of protesters trying to force their way into a government compound in the capital.

Five people were reported injured at the Centre for the Administration of Peace and Order, the government’s security command center, where protesters tried to push down barbed wire-topped concrete barriers outside the compound.

The incident occurred as thousands marched through the Thai capital in an attempt to bring down a caretaker government appointed after a court removed Yingluck Shinawatra as prime minister.

Protesters on Friday vowed to besiege television stations, government offices and police positions in Bangkok if the remnants of Yingluck’s Pheu Thai party administration were not removed within three days.

We will regain our sovereign power and set up a people's government.

Suthep Thaugsuban, a protest leader from the opposition Democrat party, urged crowds to rally outside parliament, the prime minister’s offices and five television stations to prevent them being used by the government.

“We will regain our sovereign power and set up a people’s government and a people’s legislative council,” said Suthep, a former deputy prime minister.

“We want the change of government to be smooth. But if you cannot do it smoothly within three days, we the people will do it in our own way.”

Yingluck and several ministers were removed on Wednesday after the constitutional court ruled she had abused the power of her position by transferring a civil servant.

The court replaced Yingluck with Niwattumrong Boonsongpaisan, a deputy prime minister, and retained several of her other ministers.

On Thursday, Yingluck was indicted on charges of dereliction of duty for pushing ahead with a flagship rice subsidy programme that lost the government billions of dollars.

Hundreds of police were sent to manage Friday’s protests, as fears simmered of street clashes between rival groups. Yingluck’s supporters, known as the Red Shirts, have called for a huge rally on Saturday.

Yingluck dissolved parliament in December and called a snap election but it was declared void due to a boycott by the Democrat party and disruptions by anti-government protesters.

Yingluck and the country’s election commission agreed last week a new election should be held on July 20, but the date has not been formally approved. 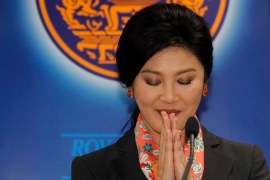 Constitutional Court’s ruling against Yingluck Shinawatra sets stage for fresh round of political bickering and unrest. 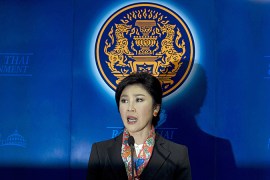