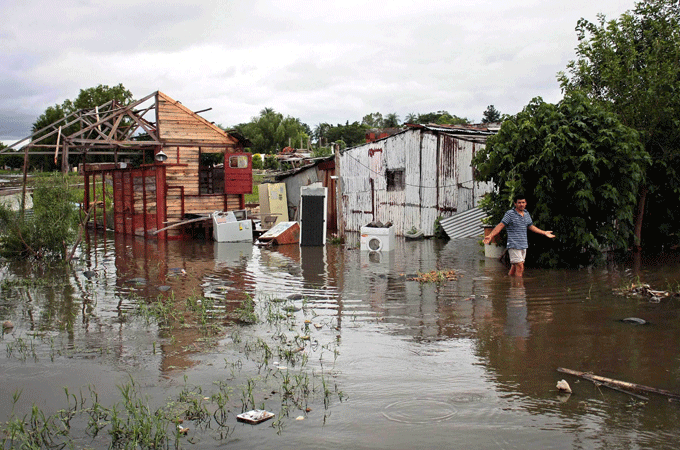 El Nino routinely causes flooding in certain parts of the world, and is blamed for the flooding in northern Argentina in 2009 [EPA]

El Nino is the name given to a slight warming of the surface waters of the Pacific. It is opposite of La Nina, which is a cooling. As the ocean is one of the biggest influences in our weather, both of the phenomena have a dramatic effect on the weather around the globe.

El Nino was discovered far earlier than La Nino, as it had a direct impact on the Peruvian fishermen. They noticed that every three to seven years, in the months of December and January, there would be virtually no fish in the seas. As it was noticed around Christmas time, they named this phenomenon El Nino (Spanish for ‘the baby boy’).

The warmest part of the Pacific Ocean is the region near the equator. Due to the spinning of the earth, the prevailing winds flow from east to west. This pushes the warm waters westwards, towards Indonesia.

In the east, around the coast of South America, cool waters would normally well up. These waters are rich in nutrients and fish, and provide plenty of food for the Peruvian Fisherman.

During an El Nino event, the prevailing winds across the Pacific weaken, and sometimes they can even reverse and blow the other way. This allows some of the warmer waters to move eastwards, away from Indonesia and towards South America.

Ll Nino has some effects that are easy to explain; for example, as the waters near the coast of South America are warmer than usual, it makes sense that the weather in the region is also warmer than usual. This will increase evaporation and therefore the region will also see more rain than in a typical year.

It also is intuitive that because the warmer waters are moving away from Indonesia, the weather here is drier than usual.

However, there are far more wider-reaching impacts of El Nino that are not at all instinctive and affect the weather across many parts of the globe. For example, El Nino usually decreases the hurricane activity in the Atlantic.

The strength of the El Nino conditions and its impacts on the weather can vary dramatically, but this image from the Climate Prediction Centre, part of the National Oceanic and Atmospheric Administration (NOAA), gives an indication of some of the most common effects of El Nino. 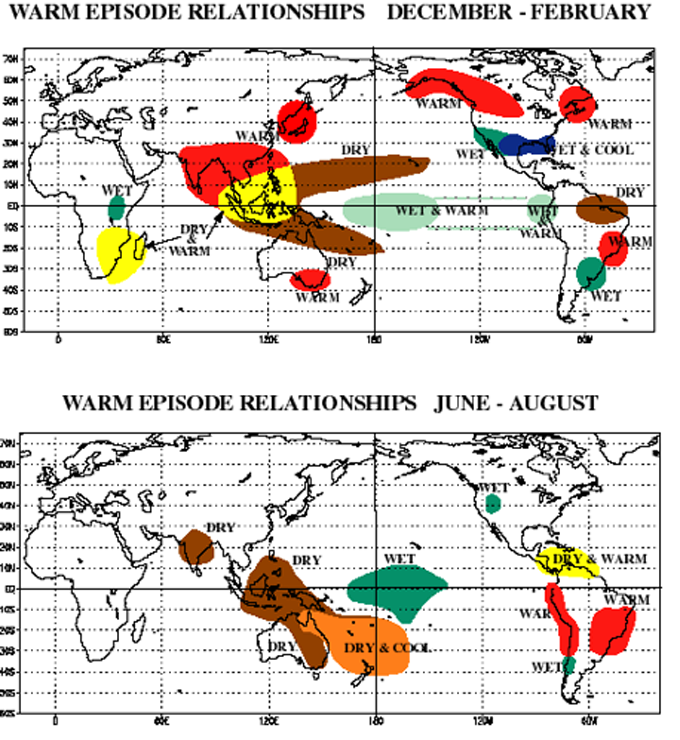 The strongest El Niño event that has ever been recorded occurred in 1997- 1998. Its impact was felt in many parts of the world. Droughts hit Indonesia and other islands in the western Pacific, triggering uncontrollable forest fires. Peru suffered deadly flooding. Record-breaking rainfall hit the US state of California, causing mudslides and flooding. Kenya too, was hit by severe flooding.

During El Nino, it’s not the whole of the Pacific Ocean which is warmer than normal.

This NASA image of the Pacific Ocean shows how the temperature of the surface water differs from average. You can clearly see the line of red and white stretching across the equator. This is the image of a classic El Nino conditions, which were recorded in September 1997. 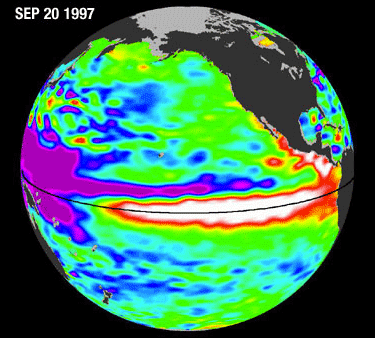 La Nina and El Nino conditions are detected by looking at data from various sources, including satellites and buoys. However, it’s very difficult to forecast the conditions of the ocean more than three months in advance.

Obviously with impacts on such an enormous scale, improved forecasts of these episodes would be invaluable. Countries would be able to prepare for flooding or droughts and this could undoubtedly save lives.