At least 40 people, including two civilians, have been killed in the eastern Ukraine city of Donetsk following a day of heavy fighting, in which the government forces used combat jets and helicopter gunships to reclaim the regional airport.

“The airport is under our full control. The enemy suffered heavy losses. We have none,” Ukraine Interior Minister Arsen Avakov said in a statement on Tuesday.

He said however that the military was continuing its operation at the airport and AFP journalists reported hearing sporadic gunfire and explosions during the morning.

The Organisation for Security and Cooperation in Europe also reported being unable to establish contact with a four-member observer team based in the restive city since Monday evening.

The battle for the main transport hub in Ukraine’s industrial heartland erupted on Monday just hours after president-elect Petro Poroshenko vowed to take a tough stand against the “terrorists”.

Russian President Vladimir Putin immediately called on Ukraine to end its “punitive” operation in the rebel-held east and for talks between Kiev and the insurgents.

Alexander Lukyanchenko, mayor of Donetsk, said 40 people were killed, but he said he was not sure how many of the rest were the rebels, Reuters news agency reported.

The bodies of 30 pro-Russian rebels have been brought to a hospital, according to separatist sources.

A rebel fighter told Associated Press news agency reporter that a lorry carrying the bodies was still parked outside the hospital, waiting for explosives experts to check it for any unexploded ordnance.

“It is not clear who is in control of the airport,” Dmitry Kosinov, the airport spokesman, told AFP news agency on Tuesday as a series of explosions and gun fire were heard early in the day from the direction of the airport.

Al Jazeera’s John Wendle, reporting from Donetsk, said: “After last night’s fight, a feeling of disbelief and shock seems to be building as an expectant atmosphere takes hold with people waiting for the next move by the armed sides.”

On Monday the armed separatists seized the international airport in rebel-held Donetsk city, prompting a closure. Later in the day they were repelled by Ukraine’s security forces that launched an airstrike against the rebels.

Sustained intensive gun fire was witnessed throughout the day and into the night by locals and international media.

Plumes of black smoke rose in the air. The city mayor went on television advising residents to stay at home.

Poroshenko has pledged to negotiate a peaceful end to a pro-Russian uprising in the east, where rebels have
seized government offices and fought Ukrainian troops for more than a month.

Yet Poroshenko described the separatists as “Somali pirates”, saying that arms should be used against “killers and terrorists”, but he also indicated that he wants a quick end to the military operation in the east.

“The anti-terrorist operation cannot and should not last two or three months,” he said. “It should and will last hours.”

The latest developments imperils an initiative by Poroshenko and Sergey Lavrov, Russian foreign minister, to hold dialogue and resolve the Ukrainian crisis diplomatically.

Lavrov said on Monday dialogue was only possible if Ukraine refrained from cracking down on pro-Russian separatists. 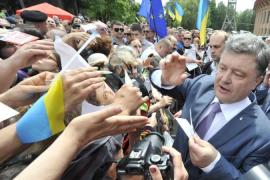 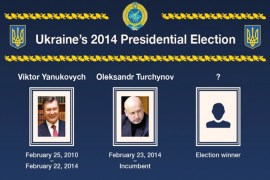 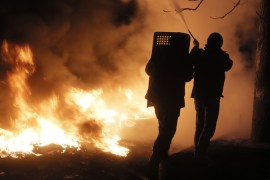