Ukraine has launched air raids and a ground assault against rebels who seized Donetsk’s international airport, as the country’s new president promised to reassert control in the east and refused to negotiate with “terrorists”.

Attack helicopters and jets fired on rebel positions in Monday’s operation, while Ukrainian troops were also sent in for a ground offensive. Ukrainian troops blocked access to the site as huge plumes of smoke were seen coming from the area.

The mayor of Donetsk urged residents to stay indoors, while Russia called on Ukraine to halt what it called a military attack on its own people.

The operation came a day after Ukrainians voted in Petro Poroshenko as their new president, and hours after pro-Russian rebels stormed the airport, demanding Ukrainian troops leave.

The airport serves a city of one million people, which the rebels have proclaimed capital of an independent “people’s republic”, and where they succeeded in blocking all voting in Sunday’s presidential election.

The attempt to seize the airport may have been intended to prevent Poroshenko from travelling there, as he has said his first trip in office would be to visit the restive east.

Poroshenko promised to talk with those in the east who have grievances, but not to those who have taken up weapons.

“They want to preserve a bandit state which is held in place by force of arms,” he said. “These are simply bandits. Nobody in any civilised state will hold negotiations with terrorists.”

Ukraine’s election commission said on Monday that Poroshenko won the presidential election in the first round with 54.22 percent of the vote, although a result would not be declared officially until all paperwork was received by Kiev.

Poroshenko made clear his most urgent task is finding a common ground with Russia.

He promised at the weekend that Moscow would respect the will of Ukrainians, and Foreign Minister Sergei Lavrov repeated that promise on Monday, saying Russia was ready for dialogue with Poroshenko. 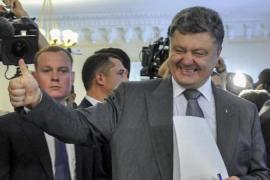 Ukraine and the rise of the ‘Chocolate King’

Will the presence of an oligarch at the helm of the country be interpreted as a step back? 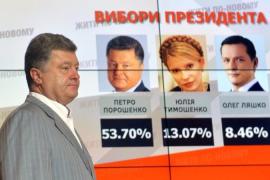 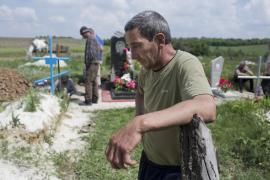 The killing of Lena Ott last week has enflamed her community, forcing some to think about joining separatist fight.