Bogota, Colombia – The Colombian government and FARC rebels have announced an agreement to combat drug trafficking, in a breakthrough just days before a presidential election.

In a joint statement, the FARC and government negotiators on Friday said the deal was part of a “comprehensive solution to the problem of illegal drugs” which has “financed the conflict” between rebels and the government.

A week-long ceasefire was also struck between the two sides as part of ongoing peace negotiations and as the country prepares to elect its next president on May 25.

More than 200,000 people have been killed and more than five million internally displaced during Colombia’s civil conflict, which has its roots in the 1960s.

While the FARC is the largest single armed group, Colombia’s government is battling a variety of fighters ranging from organised Marxist rebels to hired-soldiers linked to landowning elites.

Most voters support peace talks with the FARC, according to polls, but many do not believe those alone will end the violence.

“I believe the peace process,” Leonardo Saldana, a pastor who works with people displaced by the conflict told Al Jazeera. “But I believe it’s still far away.”

Two months ago, a clear victory was predicted for Santos. But a nasty campaign, and support for Zuluaga from Alvaro Uribe, the popular and controversial former president, has changed the political equation.

“I think this is not typical of a Colombian presidential campaign,” analyst Jorge Restrepo told Al Jazeera’s Alessandro Rampietti. “It is the lack of salient issues being discussed, or being contested, that is making this a very dirty campaign.”

“They were trying to spy on the peace process,” said Eduardo Montalegre, Colombia’s attorney general. “They were intercepting emails of negotiators and senators.”

Some analysts believe the tawdry corruption accusations are symptomatic of a larger sickness – a product of decades of political violence.

“This conflict is just an excuse for parties [rebels and politicians] fighting over money and power,” Saldana, the pastor, said. “Unfortunately, in Colombia, we don’t know what’s really going on.” 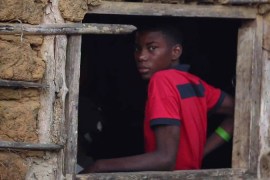 Colombia: The Deadly Fight for Land