Pro-Russian activists have declared a resounding victory in a twin referendum on sovereignty for eastern Ukraine, despite condemnation from the international community and Kiev, who called it a “criminal farce”, amid violence.

Russian news agencies said more that 75 percent of eligible residents had voted in the referendum.

With no international election monitors in place, it was impossible to verify the separatists’ claims, reported the Associated Press news agency. The preliminary vote count was announced just two hours after the polls closed in an election conducted with paper ballots.

A second referendum organised by pro-Russian separatists was also held on Sunday in eastern Ukraine’s industrial Luhansk region, with preliminary figures indicating, according to the separatists, more than a 94 percent vote in favour of self-rule.

The turnout was reported to be more than 73 percent. None of these figures can be verified.

“If this decision [to hold a referendum on joining Russia] is taken, then, respectively, the will of the people will be taken into account,” RIA cited a spokesman for the pro-Russian separatists as saying.

Andy Hunder, the director of the Ukrainian Institute in London, told Al Jazeera that the figures from the referendum were not representative of the whole eastern region.

“I think in terms of the numbers there’s no surprise there – the figure of 89 percent was actually intercepted in calls by the secret service two days ago, and they recommended to use this figure,” said Hunder, adding that the biggest issue currently was for the presidential elections to take place, with the support of the Donetsk authorities and oligarchs.

Ukraine’s central government and the West had condemned the balloting as a sham and a violation of international law, and they have accused Moscow of orchestrating the unrest in a possible attempt to grab another piece of the country weeks after the annexation of Crimea.

Ukraine’s Foreign Ministry called the twin referendum a “criminal farce,” while the US and other Western governments said they would not recognise the outcome.

Although the voting in the two regions with a combined population of 6.5 million appeared mostly peaceful, armed men identified as members of the Ukrainian national guard opened fire on a crowd outside the town hall in Krasnoarmeisk, and an official with the region’s separatist leaders said people were killed.

The Associated Press reported that the death toll was unclear. The attack in Krasnoarmeisk, about 30km from the regional capital, Donetsk, came hours after armed men, one of whom said they were from the national guard, put a stop to the voting and took control of town hall.

The results of the two referendums could hasten the breakup of the country and worsen what is already the gravest crisis between the West and Russia since the end of the Cold War.

Over the past few weeks, the Ukrainian government and the West have accused Russia of trying to destabilise the country or create a pretext for another invasion. Russia – which annexed Ukraine’s Crimean Peninsula just days after voters there approved secession in a March referendum – has rejected the accusations. 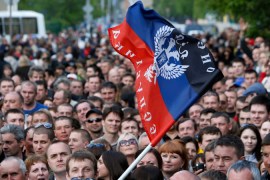 Pro-Russian separatists in the regions of Donetsk and Lugansk hold vote decried by Kiev as “criminal farce”. 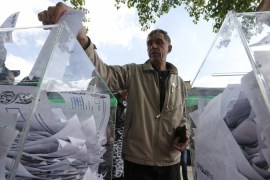 Pro-Russian separatists in provinces of Donetsk and Lugansk hold vote that could pave the way for secession.