Azraq refugee camp, Jordan – A group of Syrian children flock out and clap as a bus carrying journalists drives around Azraq camp, where thousands of white shelters looking like cottages made of lego pieces, line up neatly row upon row.

Azraq camp, which was officially opened by Jordanian authorities and UN agencies on Wednesday, and located 100km east of the capital, is Jordan’s sixth camp for Syrian refugees.

Extending over 15sq km, the camp is ready to host 25,000 refugees and has infrastructure in place to accommodate up to 51,000 more. Since Monday, only 470 refugees have moved in, making the camp look like a ghost town. But aid workers say it could be soon Jordan’s second largest camp after Zaatari.

Preparation work and planning began a year ago for the camp, which was built at the cost of $45m.

Aid workers and authorities hope that by planning well for the camp, they will avoid the pitfalls of the Zaatari camp, which was built in a rush amid an unprecedented influx of Syrians in 2012. Zaatari camp has become notorious for its harsh living conditions, poor infrastructure and security challenges, which often lead to violent protests and riots.

“We did our best to speak with the local community in Zaatari to understand what works for refugees,” Bernadette Castel, who will be managing the Azraq camp on behalf of UNHCR, told Al Jazeera.

With strong security measures already in place, good quality shelters and decentralised services, aid workers say the Azraq desert could be a more bearable place to live for refugees who fled bloodshed.

The camp was designed to look and function likes a real city. Paved streets with road signs connect what aid workers call villages: units of shelter accommodating between 10,000 to 15,000 refugees. Each village has a school, clinic and playground. One major hospital is also available to serve the “city”.

“Decentralising services have been one of our priorities,” Castel said. One big supermarket accepts vouchers handed out by the World Food Programme, so refugees can shop for the supplies they need.

While tents have always been used in emergency response situations, the Norwegian Refugee Council (NRC) has come up with a new design of shelters made primarily with zinc and steel to survive the harsh desert environment. “This site experiences extreme forms of weather,” Robert Beer, NRC’s country director told Al Jazeera. “It can flood during winter time, high winds in the spring time, and very high temperatures during the summer periods: up to 40 degrees Celsius,” Beer explained.

The shelters have high ceilings with insulation and privacy partition for family members living there, which should also provide personal security for refugees, Beer added.

Unlike Zaatari camp, police are present inside the camp 24 hours a day, and Gendarmerie and Civil Defence Forces are ready to be deployed if needed. “There will be one major police station and two sub stations,” Wedah al-Hamoud, manager of Syrian Refugee Camp Affairs in Jordan, said as he listed the mistakes and lessons learned from the experience of the Zaatari camp.

In Zaatari, clashes between refugees and Jordanian authorities have been a challenge, with one refugee killed most recently and one policeman injured.

The site where Azraq camp is built was used briefly, in the early 1990s, as a resettlement camp for third country nationals fleeing Kuwait and Iraq during the Gulf War. But over the past year, work has been done to design it like a real city, which some see as a permanent solution for the increasing number of those displaced by the Syrian war.

“The new camp is only an indication that the international community has failed at solving the Syrian crisis, or at least in providing a humanitarian solution,” said Fahad Khaitan, political commentator and columnist for al-Ghad newspaper.

With the war in Syria not looking like it will end anytime soon, the camp can be built further to eventually accommodate as many as 130,000 refugees. But Jordanian officials wish for an end to the crisis that overstretched their country’s already limited resources. “When we talk about this being temporary, I do pray that it will be the closet thing to the short term,” said Jordanian Interior Minister Hussein Majali. 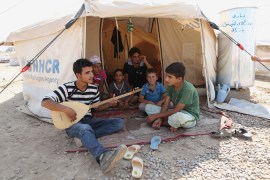 Finding relative stability in northern Iraq, many Syrian refugees are in no hurry to return to their war-torn country. UNHCR says figure is “a devastating milestone for a host community stretched to breaking point” and urges more support. 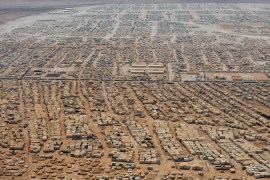