Pro-Russian activists who seized the main administration building in the eastern Ukrainian city of Donetsk
have proclaimed the creation of a sovereign “people’s republic” independent of Kiev rule.

A spokesman for the protesters who came from the occupied building announced the decision to reporters on Monday.

Footage posted on YouTube showed one Russian speaker telling the packed assembly from a podium: “I proclaim the creation of the sovereign state of the People’s Republic of Donetsk.”

The protesters had broken into the building of the industrial city near the Russian border a day earlier.

Elsewhere in Ukraine, other pro-Russian activists broke into the state security headquarters in the eastern Ukrainian city of Luhansk and raided its arsenal, prompting Ukrainian police to close down all roads leading to the city.

“Unknown people who are in the building have broken into the building’s arsenal and have seized weapons,” police said in a statement on Monday, adding that they had been put on alert and had blocked all entrances to the city.

Luhansk, which lies around 25km west of Russia, is a city where secessionist sentiment has sparked frequent protests since the country’s Russia-friendly president was ousted in February.

A crowd of pro-Russian activists had stormed the security services building in Luhansk on Sunday. Local media reported that demonstrators pelted the building with eggs, stones, a smoke grenade and finally a firebomb.

Separately, Arsen Avakov, the Ukrainian interior minister, said on his Facebook page that the regional administrative building in another eastern city, Kharkiv, had been cleared of “separatist” protesters.

“Thanks to all those who offered their help,” he wrote, without specifying how the protesters were removed from the building.

Ukraine’s authorities have accused Russia of fomenting the unrest.

The unrest took place as a Russian soldier shot dead a Ukrainian naval officer in the town of Novofyodorovka in the east of Ukraine’s Crimea Peninsula, according to the Ukrainian Defence Ministry. Few details were released on the shooting, on Sunday.

Pro-Russian protests have been held in various parts of eastern Ukraine since Russia intervened in Crimea, and annexed it last month after the overthrow of Ukrainian President Viktor Yanukovich amid mass protests in the capital Kiev. 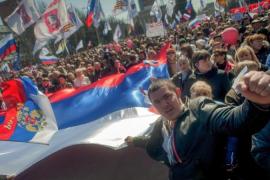 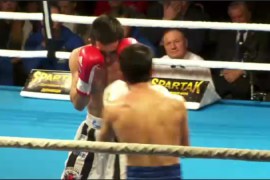 Russia and Ukraine face off in boxing ring

Amid the continuing political dispute between the two countries, the Boxing World Series brings them face-to-face.