Baghdad, Iraq – Polls have opened in Iraq for parliamentary elections that are expected to result in a period of difficult coalition-building, as violence across the country soars close to its worst levels.

The incumbent prime minister, Nouri al-Maliki, ordered airspace closed, ministries shut and a curfew during the election period after rebels, the Islamic State of Iraq and the Levant (ISIL), threatened to disrupt the poll with suicide attacks and car bombs.

The election is the first since US troops pulled out in December 2011 and represents the biggest test the country’s often under-equipped security forces have faced.

State television showed Maliki voting in a central Baghdad on Wednesday morning. “We are voting for the future of our children,” he said after casting his ballot. “Terrorists were challenging us and now we challenge them. I call upon all Iraqis … to cast their votes in a brave manner. Because that is a big blow in the face of the terrorism.”

ISIL launched a triple suicide assault on an election rally last week, killing 37 people and wounding more than 80, in an attack that underlined the difficulty of protecting the vote.

Violence has this year risen to levels not seen since 2006 to 2007, a period when tens of thousands died in tit-for-tat sectarian bloodletting and the country almost fell into all-out civil war.

Analysts say that the intention of ISIL, and other groups battling the Shia-led government, is to provoke that sort of ethnic violence again in an attempt to undermine the state.

Nearly 1,700 civilians were killed in the first three months of this year, according to figures from the United Nations.

Analysts and diplomats say that 63-year-old Maliki has a good chance of being returned to power but that he faces a difficult fight. Though he has no clear direct challenger for the top post, a wide mix of parties – Sunni, Shia, Kurd and secular – are lined up against his Shia Dawa group.

After the 2010 election, and after a tortuous eight-month negotiation period, Maliki formed a coalition government that was backed by Sunni and Kurdish groups.

A coalition government is again a certainty given the fractured nature of Iraq’s politics and its proportional representation electoral system.

Maliki has fallen out with some cross-sectarian colleagues, meaning a new coalition would likely be more Shia-dominated than before.

The streets of the capital were almost deserted on the eve of the vote, a public holiday and the fear of bombings keeping people inside. There was a visibly increased security presence and, at the hundreds of checkpoints that criss-cross the city, soldiers were being extra cautious.

Of the few people who were out on Tuesday, most told Al Jazeera that they intended to vote despite the threat of violence.

“We have problems with many things,” said Dhafar Zuhair Hamed, a 39-year-old engineer from the Mansour district.

“So I am optimistic that most of the Iraqi people will vote to try to determine the right government.”

The campaign has been lively with violence, corruption, oil and poverty high on the agenda. Posters and bunting have been hung on almost every lamppost, wall and fence in Baghdad and other cities, and debates between the candidates have been energetic and argumentative.

Polls opened at 4am GMT. About 22 million Iraqis will cast their votes at 7,964 polling stations. 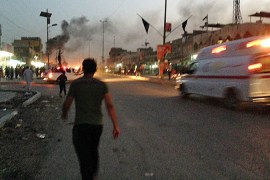 US soldiers may have left the Middle Eastern country in 2011 but the relationship has not ended. 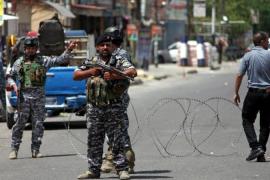 Iraqi analyst Zaid al-Ali explains the political and security context within which residents will cast their votes. 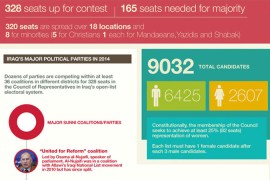 Millions of Iraqis will head to polls in 18 governorates to elect the parliament for a new national government. 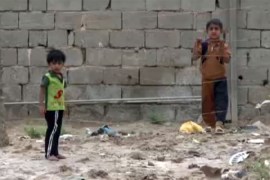 Misappropriation of public funds leaves many in Basra without access to clean water and other utilities.