Hundreds of Egyptian activists took to the streets against an anti-protest law, one month before a presidential election which former army chief Abdel Fattah el-Sisi is widely expected to win.

On Saturday, the protestors marched to the presidential palace in Cairo calling for the scrapping of the law passed by Egypt’s army-backed interim leadership in November to curb unrest that erupted after the army’s overthrow of elected Islamist president Mohamed Morsi.

The law requires anyone planning a demonstration to obtain police permission. Saturday’s protesters, however, did not.

A few threw stones at the police, who did not react and there was no serious violence.

“Down, down with army rule,” the protesters chanted. Some burned posters of Sisi, who stepped down from his post as the head of the army last month to run for the presidency in the vote on May 26-27.

Western powers and rights groups have voiced concern about the future of freedoms and democracy in Egypt three years after the ousting of Hosni Mubarak, an autocrat who ruled unchallenged for 30 years, in a popular uprising.

But a fierce army-backed crackdown on activists, mainly from Morsi’s Muslim Brotherhood group, has narrowed hopes of greater political freedoms under the former army leader’s rule.

Thousands of Islamists have been killed or jailed since Morsi was ousted on July 3. Some liberal activists have also been arrested. But Sisi is popular with many Egyptians who see him as capable of restoring security after three years of turmoil.

“We are determined to continue to protest to cancel this law,” said Khaled Dawoud, a protester and spokesman of the liberal al- Dostour party. “I hope the law gets scrapped so that elections are carried out in suitable conditions.”

Three leading activists of the anti-Mubarak revolt were jailed for three years in December for defying the law by failing to apply for permission from the police to protest.

The activists who rallied on Saturday asked for their release. “I call for a presidential pardon for the jailed activists and also 12 other young members from the Dostour party,” Dawoud said.

Hundreds of police and army officers have also been killed in violence that spread across the country after Morsi’s overthrow and which the state blamed on the Muslim Brotherhood.

The Brotherhood, which is Egypt’s oldest and most organised political, denies any links to violence saying it is committed to peaceful activism. 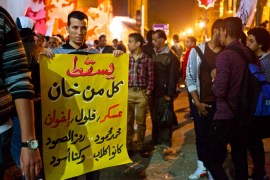 The interim president, Adly Mansour, signs bill that requires Egyptians to seek permission to protest ahead of event. 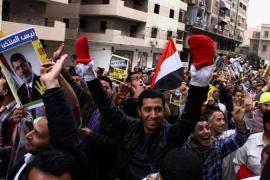 At least 86 arrests made after protesters clash with police, just days after passage of controversial legislation.