The Russian military has conducted fighter-jet drills in the southwestern Krasnodar region, close to Ukrainian territory.

The Kremlin ordered the new military exercises on Ukraine’s border after the Ukrainian government said its troops killed five “terrorists” in operations to take back the pro-Russian stronghold of Slovyansk.

NATO estimates Russia has also deployed up to 40,000 troops to the border areas.

An amateur video published on Thursday showed a large Russian military convoy moving in the town of Novoshakhtinsk just 10 kilometres from the Ukrainian border.

The footage shows numerous military trucks, as well as tanks and armoured personnel carriers moving on a highway.

Russia has maintained it has the right to protect Russian-speakers if they come under threat, a reason it gave for annexing the Crimean peninsula from Ukraine last month.

Earlier on Thursday Ukraine’s interior ministry said Ukrainian troops had killed the pro-Russian separatists in the Slovyansk operations as paratroopers took over three “illegal checkpoints” around the town, which has been in separatist control for almost two weeks.

Videos posted online showed smoke rising from barricades around the town. Reports said rebels had set fire to the barricades as they abandoned them and retreated from Ukranian forces.

Russian Defence Minister Sergie Shoigu said Russia was “compelled to react to such a situation”.

Vladimir Putin, the Russian president, had warned earlier on Thursday that there would be consequences if the Ukraine army was used against pro-Russian activists.

“If Kiev really began to use the army against the country’s population… that is a very serious crime against its own people,” he said.

The Slovyansk operation came hours after the Ukrainian government reported that its forces had taken control of the town hall in the city of Mariupol, and repelled an attack on an army base in the eastern town of Artemivsk, the ministries said.

“The town hall is liberated and can function normally,” Arsen Avakov, Ukraine’s interior minister, said on his Facebook page.

Ukraine’s defence ministry said in a statement that Ukranian forces repelled nearly 100 separatists in an attack on the military base in Artemivsk, just north of rebel-held Donetsk.

US President Barack Obama said on Thursday that Russia had failed to abide by the spirit of a deal to ease tensions in Ukraine, and that new sanctions against Russia were being “teed up”.

He said “malicious armed men” continued to occupy buildings in eastern Ukraine, in contradiction to a deal agreed last week in Geneva by Ukraine, Russia, the European Union and the US.

“So far we have seen them not abide by the spirit or the letter of the agreement in Geneva,” Obama said.

If that continued, he said, “there will be further consequences and we will ramp up further sanctions”. 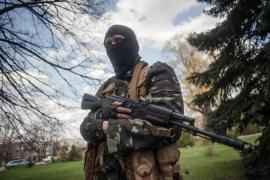