The US is to deliver 10 Apache attack helicopters to Egypt, relaxing a suspension of aid imposed after the military removed Mohamed Morsi from the presidency last year.

News of the decision was conveyed by Chuck Hagel, the US defence secretary, to his Egyptian counterpart Sedki Sobhi on Tuesday.

The delivery will aid Egypt’s “counter-terrorism” operations in the Sinai Peninsula, the Pentagon said.

John Kerry, US secretary of State, paved the way for the deal by certifying to the US Congress that Egypt had met key criteria for the US to resume some aid.

Those criteria included Egypt “upholding its obligations under the Egypt-Israel Peace Treaty”, the State Department said.

But Kerry noted in a call with his counterpart, Nabil Fahmy, that he was not yet able to certify that Egypt was taking steps to support a democratic transition.

The State Department said that Kerry urged Fahmy “to follow through on its commitment to transition to democracy – including by conducting free, fair, and transparent elections”.

Egypt is to hold a presidential election next month which Abdel Fattah al-Sisi, the former army general who deposed Morsi, is expected to win.

Kerry also called on Egypt to ease restrictions on freedom of expression, assembly, and the media, she said.

Peter Greste, Mohammed Fahmy and Baher Mohamed were arrested in December and accused of terrorism and reporting false news, although several court sessions have yet to provide any evidence for the charges.

A fourth journalist, Abdullah Elshamy, has been in prison without charge for six months.

Al Jazeera rejects the charges against its staff and calls for their immediate release.

Human Rights Watch, the US campaign group, earlier this month cautioned the US against resuming military assistance until the Egyptian government ended rights abuses and held violators accountable. 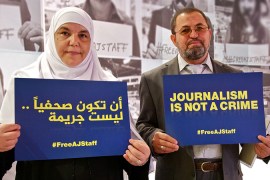 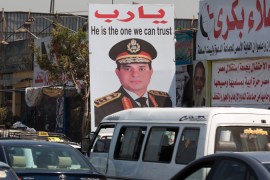 The Godot of Egypt

After years of turmoil, many Egyptians view Abdel Fattah el-Sisi as a saviour – but miracles are unlikely, experts warn. 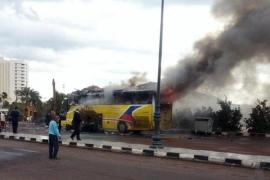 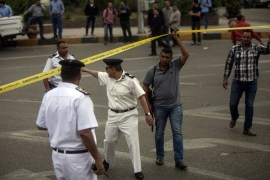