Divers have recovered 13 more bodies from inside the ferry that sank off South Korea nearly four days ago, bringing the confirmed death toll to 58.

Officials said on Sunday that the bodies were recovered after divers gained access to the inside of the ferry after three days of failed attempts due to strong currents. Three bodies were pulled out of the fully submerged ferry just before midnight.

Details of how they got inside the ship were not immediately clear, the Associated Press news agency reported.

The ferry, carrying 476 passengers, many of them schoolchildren, capsized on Wednesday on a journey from the port of Incheon to the southern holiday island of Jeju.

Around 174 people have been rescued but hopes are fading for the estimated 240 people who remain missing.

The captain of the ferry has been arrested on suspicion of negligence and abandoning people in need. Two other crew members have also been taken into custody, including a junior officer who a prosecutor said was steering in challenging waters unfamiliar to her when the accident occurred.

Investigators say Captain Lee Joon-seok, the ship’s captain, was not on the bridge at the time the ferry, the Sewol, started to list sharply and that a junior officer was at the wheel.

After his arrest the captain said he ordered people to stay in their cabins because he feared they would be swept out to sea by the current. 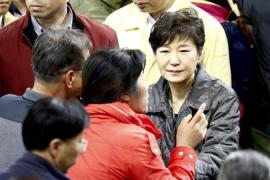 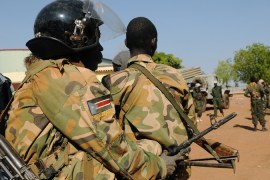 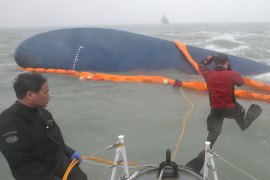