NATO has said it will suspend “all practical civilian and military cooperation” with Russia because of Moscow’s occupation and annexation of Ukraine’s Crimea region.

The decision was taken on Tuesday by the military alliance’s foreign ministers in Brussels who urged Russia in a statement “to take immediate steps … to return to compliance with international law”.

NATO and Ukraine announced in a joint statement after their ministers met that they would intensify cooperation and promote defence reforms in Ukraine through training and other programmes.

The suspension of military cooperation came as NATO said it had seen no sign that Russia was withdrawing troops from the Ukraine border, according to the alliance’s secretary-general Anders Fogh Rasmussen.

“Unfortunately, I cannot confirm that Russia is withdrawing its troops. This is not what we are seeing,” Rasmussen told reporters in Brussels.

Ministers from the 28 alliance member nations met for the first time since Russia’s military occupation and annexation of Crimea triggered the worst East-West crisis since the Cold War.

Al Jazeera’s Neave Barker, reporting from Brussels, said: “The relationship is at its lowest since the formation of the NATO-Russia Council in 2002, formed to boost unity on narcotics control and anti-terrorism technology.

“But according to NATO, those joint efforts are now on hold. The message coming from Brussels is that it’s certainly no longer business as usual.”

Tension between Ukraine and Moscow has continued, with Russian energy giant Gazprom announcing on Tuesday a more than 40 percent increase in the price of gas exports to Ukraine.

Diplomats said the ministers in Brussels would consider options ranging from stepped-up military exercises and sending more forces to eastern member states to the permanent bases of alliance forces in those countries – a step Moscow would view as provocative.

Asked if NATO could station forces permanently in the small former Soviet Baltic states, Rasmussen said: “We are now considering all options to enhance our collective defence, including … further development of our defence plans, enhanced exercises and also appropriate deployments.”

Polish Foreign Minister Radoslaw Sikorski told reporters as he arrived that he would welcome “some more prominent NATO presence in Poland”.

Meanwhile, the European Union has decided to make a swift payment of financial aid to Ukraine, the bloc’s economy chief Olli Rehn said, dismissing the possibility of economic sanctions against Russia unless it takes more action.

Rehn’s comments on Tuesday offered the prospect of quick financial backing from Europe for Ukraine, which is grappling with increased gas prices.

The European Union has pledged $15bn as part of a package of support with the International Monetary Fund.

“It is in the interests of Ukraine and Europe to maintain peace and stability on our continent,” Rehn told journalists on the sidelines of a meeting of European finance ministers in Athens.

He said the first payment would be “made swiftly”, according to the Reuters news agency.

But while he underscored Brussels’ desire to back Ukraine, he played down the idea of stiffer penalties on Russia following its annexation of Crimea.

“As regards sanctions, no sensible European would want to see economic sanctions,” he said, adding that none should be necessary if Moscow took no action.

“In case Russia would not escalate the crisis, then we should be able to avoid this sanctions,” he said. 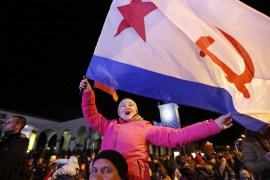 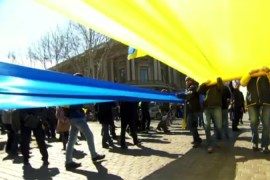 Thousands march in the Black Sea city to show solidarity with Kiev and protest against further Russian incursions. 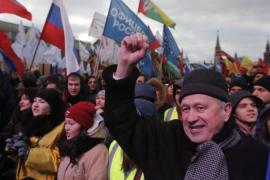 Why do Russians support intervention in Ukraine?

Russia’s actions in Ukraine and its annexation of Crimea have been backed predominantly by the older generation. 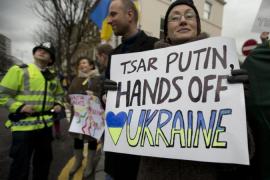 Ukraine crisis: World will never be the same again

The West has proved to be a bad loser over Crimea and it has made matters worse for itself and its allies.