The US has delayed its decision on the Keystone XL oil pipeline from Canada by extending its review of the controversial project indefinitely, a move considered disappointing by the Canadian Prime Minister.

Friday’s extension will push any decision over the project until after the US mid-term elections in November, with the US State Department saying that it was extending a comment period for several government agencies set by President Barack Obama until May.

“The agency consultation process is not starting over. The process is ongoing, and the department and relevant agencies are actively continuing their work in assessing the permit application,” the State Department said in a statement.

Jason MacDonald, a spokesman for Canadian Prime Minister Stephen Harper called the US decision a political one: “We are disappointed that politics continue to delay a decision on Keystone XL.”

The $5.4bn project, proposed by Canadian company TransCanada, has become a proxy for a larger battle between environmental activists and energy advocates over climate change and the future of American energy.

It has also become an issue of concern in Canada, which has long pushed for approval of the pipeline. The review process has lasted more than five years.

In a statement, TransCanada CEO Russ Girling said, “We are extremely disappointed and frustrated with yet another delay.”

He added, “We are also disappointed the US will continue to rely on suspect and aggressive foreign leaders for the eight to nine million barrels of oil that is imported every day. A stable, secure supply of oil from Canada and from the US makes better sense, and I am sure a majority of Americans agree.”

By linking Canadian fields to refiners in the Gulf Coast, the 1,900km pipeline would lift an energy patch where heavy oil is abundant but that is reached only by burning vast amounts of fossil fuels.

The oil industry argues projects like Keystone can reduce the US’ reliance on Middle East oil while partnering with one of the country’s closest political allies, Canada.

But Keystone opponents – among them environmentalists who make up a part of Obama’s political base – say consuming carbon fuel to wrench oil sands crude from the ground will worsen climate change and the pipeline meant to carry up to 830,000 barrels a day will only spur more production.

They expect Obama to reject the project and so fulfill a commitment to battling climate change. 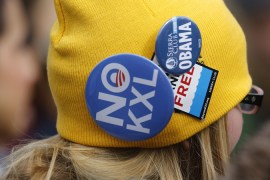 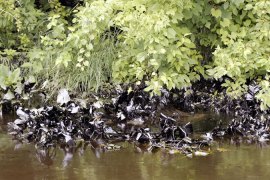 The pipeline of ‘poison’

The aftermath of a tar sands oil spill in Michigan has left a community with sickness, anger, and loss of livelihood. 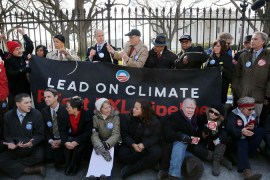 State Department concludes controversial pipeline from Canada will not cause “substantial change” in carbon emissions.