A morning rush hour bomb has killed at least 71 people at a bus station on the outskirts of Abuja, the deadliest attack ever on Nigeria’s federal capital.

Suspicion fell on Boko Haram, though there was no immediate claim of responsibility for Monday’s blast from the armed group battling Western influence, who are mainly active in the northeast.

As well as the 71 dead, police said 124 people were wounded in the first attack on Abuja in two years, Reuters news agency said.

Visiting the site later in the day, President Goodluck Jonathan pledged that Nigeria would overcome the insurgency.

“The issue of Boko Haram is quite an ugly history within this period of our own development,” he said.

“But we will get over it … The issue of Boko Haram is temporary.”

Monday’s bombing in Abuja  left a hole roughly 4ft deep and spread debris across the compound, an AFP reporter and witnesses said.

Bloody remains lay strewn over the ground as security forces struggled to hold back a crowd of onlookers and fire crews hosed down a bus still holding the charred bodies of commuters.

The attack underscored the vulnerability of Abuja, built in the 1980s in the geographic centre of Nigeria to replace coastal Lagos as the seat of government for what is now Africa’s biggest economy and top oil producer.

Boko Haram, which says it is fighting for an Islamic state, has largely been confined to Nigeria’s remote northeast.

The group has been particularly active in the area over the past few months and is increasingly targeting civilians it accuses of collaborating with the government or security forces.

Boko Haram has carried out several previous attacks in and around Abuja, including a 2011 car bombing at the UN headquarters in the city that killed at least 26 people.

Bus parks have been among Boko Haram’s most favoured targets, including multiple, coordinated bombings at a terminal in the northern city of Kano last year that killed more than 40 people.

Boko Haram violence has cost more than 1,500 lives already this year, but most of the unrest has affected villages in the remote northeast.

Last May the military launched a massive offensive to crush the uprising and has described Boko Haram as being in disarray and on the defensive.

A major attack in Abuja, just a few kilometres from the seat of government, will perhaps cast further doubt on the success of that campaign.

Jonathan, who is expected to face a tough re-election battle next year, has faced intense criticism over the continuing Boko Haram violence.

With much of the recent violence contained in the northeast, Jonathan had been able to claim that progress was being made in the battle against the fighters.

An escalation of violence in or near Abuja would pile further pressure on Jonathan.

Jonathan said the latest presumed Boko Haram attack and others like it were “unnecessary distractions that are pushing us backwards”.

“The government is doing everything to make sure that we move our country forward,” he said.

Boko Haram’s leader, Abubakar Shekau, who has been declared a global terrorist by the US, pledged in a recent video message to widen the group’s violence outside its northeastern stronghold.

Nigeria is Africa top oil producer and largest economy, but more than 80 percent of the its 170 million people live on less than $2 per day. 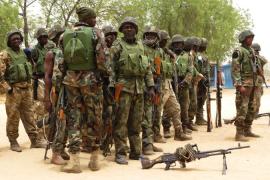 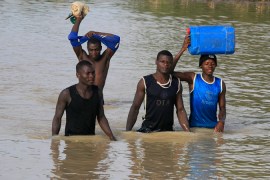