Syrian jet fighters are reported to have launched a fierce offensive against a string of opposition strongholds, including Kafr Zita, a village north of Damascus that was recently hit by an alleged poisonous gas attack.

Other towns on the edges of the capital, including Eastern Ghouta area, were also hit by the bombardment, the Syrian Observatory for Human Rights said on Sunday.

“Warplanes carried out two air strikes against areas of Douma” northeast of Damascus, the UK-based monitoring group said, adding that “at least five people including one child were killed and several others injured”.

One of the strikes on Douma, an opposition stronghold since early in the revolt against President Bashar al-Assad, hit a crowded marketplace, according to the Syrian Revolution General Commission, a network of activists on the ground.

Douma and other towns and villages in Eastern Ghouta have been under a Syrian army siege for a year.

Sunday’s offensive came as Assad said that the three-year war tearing the country apart was turning in the government’s favour, state television reported.

“This is a turning point in the crisis, both militarily in terms of the army’s achievements in the war against terror, and socially in terms of national reconciliation processes and growing awareness of the truth behind the [attacks] targeting the country,” the TV channel quoted Assad as saying.

Details of the poisonous gas attack on Friday in Kafr Zita, a village in Hama province about 200km from Damascus, remain sketchy.

State television and rebel forces traded accusations over the attack that reportedly caused “suffocation and poisoning” of residents. The Syrian National Coalition, the main opposition group, said the attack hurt dozens of people.

The air raids came as fighting raged on the edges of Daraya pitting rebels against the army, which for more than a year has waged a bitter campaign aimed at securing the capital.

Other air raids targeted Mleiha, also in Eastern Ghouta, while clashes pitted rebels and their Al-Nusra Front allies against the army and its Lebanese Shia ally Hezbollah, the Syrian Observatory said.

Mleiha has suffered heavy bombing for 10 consecutive days, as the army and Hezbollah attempt to break through rebel lines.

North of Damascus, the army overran a string of hills overlooking Rankus, a former opposition stronghold in the strategic Qalamun mountains that fell to the regime on Wednesday, said state television.

Against this backdrop, the state news agency SANA reported “the death of a young man and the wounding of 22 others” in a mortar attack launched by “terrorists” in central Damascus.

The Syrian Observatory said two people were killed in the attack.

More than 150,000 people have been killed in Syria’s war, and nearly half the population have been forced to flee their homes.

Has Ukraine shifted attention from Syria?

We analyse what effect Russian diplomacy and military action is having on the three-year-old crisis. 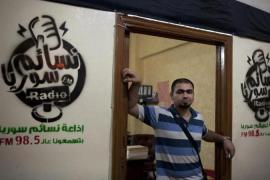 Stations based in Turkey provide Syrians with the latest news. 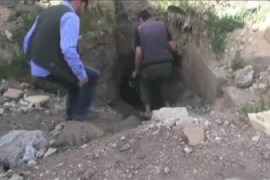 Artefacts are being illegally excavated from sites damaged by shelling, and smuggled out of the country. 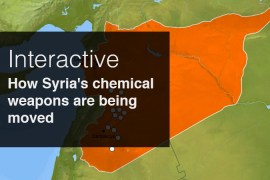