NATO’s chief military commander in Europe has suggested deploying American troops to alliance member states in eastern Europe as a countermove to the Russian military threat against Ukraine.

US Air Force General Philip Breedlove told the Associated Press news agency on Wednesday that he would not “write off involvement by any nation, to include the United States”.

Foreign ministers of the 28-nation alliance have given Breedlove until Tuesday to propose steps to reassure NATO members nearest Russia that other alliance countries have their back.

“Essentially what we are looking at is a package of land, air and maritime measures that would build assurance for our easternmost allies,” Breedlove told AP. “I’m tasked to deliver this by next week. I fully intend to deliver it early.”

In March, Russian troops took control of Ukraine’s Crimean Peninsula, whose inhabitants then voted in a referendum to secede and join Russia.

In the most recent development, pro-Russian separatists, suspected to be backed by Moscow, seized government buildings in eastern Ukraine, prompting Kiev to issue threats of using force to regain control over the offices.

The US and other Western countries have accused Moscow of massing troops on Ukraine’s border to maintain the pressure on the government in Kiev, and possibly for military use.

Speaking at the end of a NATO conference in Paris, Breedlove told AP the Russian armed presence near Ukraine’s frontier continues unabated.

To illustrate his point, hiss staff provided AP with a set of commercial satellite photographs they said showed Russian warplanes, combat helicopters, armor, artillery and a probable airborne or special forces brigade deployed in locations east of the Ukraine-Russian border, including along the coastline of the Sea of Azov.

A defence analyst at the Center for Strategic and International Studies, a Washington-based think tank, reviewed the satellite images and said the forces depicted in them do not appear to be involved in training exercises.

They appear to be “in combat readiness,” Anthony Cordesman said. But he said it IS unclear from the images how much of a buildup of Russian forces there has been in the border area.

“They show there is a mixture of light and heavy forces and that they could go quickly” if ordered into Ukraine, and that they include forces to provide air mobility, Cordesman said.

“But that’s all they show.”

“I would characterise it as a combined arms army. In other words, this is an army that has all of the provisioning and enablers that it needs to accomplish military objectives if given them.”

The force could stand pat and intimidate Ukraine solely by its presence, drive south to create a land bridge with Crimea, push along the Black Sea coast to the Ukrainian port city of Odessa and the largely Russian Trans-Dniester enclave of Moldova, or invade other areas of eastern Ukraine where ethnic Russians are demanding unity with Russia, he said. 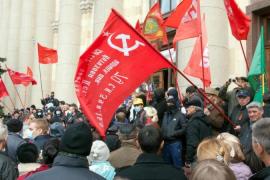 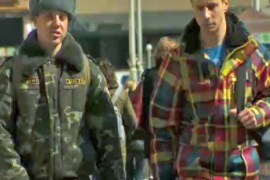