The opposition in Venezuela has criticised Elias Jaua, the country’s foreign minister, after he addressed the 25th session of the UN Human Rights Council (UNHRC) in Geneva.

Venezuela remains tense after weeks of violent student-led protests, which have seen 18 people killed and more than 260 injured since February 12, according to the government.

Jaua told the council that of the 18 people who were killed, “only in three of those cases is it believed that this was due to illegal acts by police [officers], who need to be brought to trial.”

“International and national media are carrying out psychological warfare against my country,” he told the council.

Jaua said that the “propaganda” was supported by “governments that have turned human rights into a weapon for punishing independent governments … [and] to justify foreign intervention in our internal affairs.”

In response, leading opposition leader and Miranda state governor, Henrique Capriles, said: “We have asked the UN to allow us to brief on what is actually going on in Venezuela.”

He said the oppositon has requested the UN to let it outline the events in Venezuela instead of “the government tales full of lies.”

Officials have said that since the start of the unrest, more than 1,000 people have been arrested, most of whom have since been released.

The opposition has refused to open a dialogue until President Nicolas Maduro releases protesters from jail and stops harsh crackdowns on protests.

Jaua told the council that demonstrations in the country had to be “peaceful, without weapons”.

“For the Bolivarian revolution, peaceful protest is one of the forms of direct participation of the people,” said Jaua.

“But the right to demonstrate and protest is not absolute; it needs to be peaceful, without weapons.”

Jaua also met UN Secretary-General Ban Ki-moon who opened the 25th session of the UNHRC in the Swiss city.

The UN has called for the Venezuelan government to respect peaceful assemblies and expressed concern about the use of excessive force against protesters.

At a news conference outside the meeting, Ban said: “I urge Venezuelan authorities to listen to legitimate expectations of those who protest.”

Meanwhile, Antonio Ledezma, Caracas’ Metropolitan Mayor, has submitted a paper with regard to human rights in the country on behalf of the opposition Unified Democratic Panel to the Organisation of American States (OAS).

“Dear OAS Sirs, Dear Mr [Jose Miguel] Insulza [OAS Secretary-General], you were appointed to preside over that body; not to defend your incumbency, but to advocate the rights of democratic people in the world,” Ledezma said, according to a news briefing quoted by El Universal.

The paper handed over to the OAS includes a proposal to entrust a high-level commission with the task of visiting Venezuela in order to check the status of institutions and investigate any human rights abuses.

The unrest is Venezuela’s worst since President Hugo Chavez died of cancer a year ago and the opposition came within a hair of winning the presidency in April’s election, but it remains to be seen if it will spread to include the lower classes who benefited from Chavez’s generous social welfare programmes.

Police used tear gas in a bid to disperse anti-government protesters in the Venezuelan capital on Monday.

Protesters responded with rocks and used slingshots to launch projectiles at the police.

Television footage showed at least one anti-government protester being dragged away by police, the Reuters news agency reported.

Lopez, who was arrested on February 18 after helping launch the nationwide protest movement, demanded top officials’ including the interior minister’ resign over the use of deadly force against demonstrators.

Opposition leaders called for another march on Monday after bringing thousands onto the streets on Sunday, despite the Carnival holiday that usually draws Venezuelans to the beach.

Protesters in the wealthier east of the capital have clashed nearly every day with National Guard troops in confused melees that generally kick off in the early evening.

The demonstrators set up improvised barricades of debris and burning trash that are usually cleared by the next day.

There are no signs that the unrest, which Maduro excoriates as a US-backed coup effort, could overthrow his government or force him to resign, despite widespread discontent with soaring inflation and rampant crime, Reuters reported. 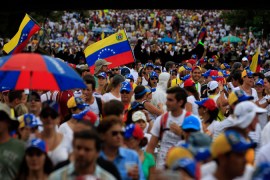 Large protests in Venezuela despite carnival

Thousands of opposition supporters rally across the capital but it is still unclear if they can maintain their momentum. 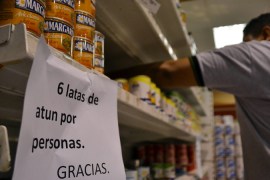 As bizarre as it may seem in a country with the world’s largest oil reserves, all agree food hoarding is a real problem. 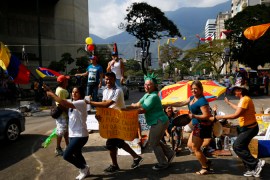 Demonstrators in Caracas call for release of dozens of activists arrested during three weeks of violent protests. 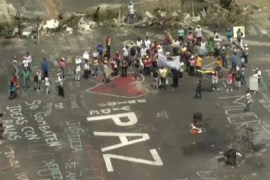 Venezuela barricades give focus to protests

Road blocks provide a meeting place for people to air their grievances and challenge the authorities.