Russian troops have surrounded a Ukrainian airbase in Crimea and issued an ultimatum to forces inside to surrender, the deputy commander of the base in Belbek, near Sevastopol, said.

The base, above which the blue and yellow Ukrainian flag was flying, is one of the few military facilities on Crimea still controlled by Ukraine after the annexation of the peninsula by Russian forces.

“The Russian troops at our aerodrome gave us an hour to surrender or they will start storming. We are going nowhere, let’s see what this storming is,” Oleg Podovalov told Reuters news agency on Saturday.

The ultimatum expired at 1230 GMT, but there was no sign of the Russians moving in on the base.

The Russian takeover of the Black Sea peninsula has been largely bloodless, though one Ukrainian serviceman was killed and two others wounded in a shooting in Simferopol earlier this week.

Ukraine’s defence ministry said on Friday that Crimea’s bases were still formally under Ukrainian control, but most are now occupied by Russian troops and fly Russia’s tricolour flag.

Earlier on Satuday, about 200 pro-Russian protesters stormed a Ukrainian airforce base in Novofedorivka town of western Crimea smashing the windows as Russian officers stood outside watching the protesters who took down the Ukrainian flag and put up the white and blue flag of the Russian navy.

Ukrainian servicemen barricaded themselves inside buildings and threw smoke bombs at the intruders from the roof.

“It’s my unit and I have to protect it!” a Ukrainian soldier yelled to the Russian officers from the roof.

Some of the people threw the smoke bombs back at the soldiers.

A Russian military officer then went inside the building to negotiate with the Ukrainians as the crowd of protesters were told to leave.

Several dozen soldiers were later seen walking out of the base, leaving it empty, with Russian soldiers standing outside.

Withdrawal not on Ukraine’s agenda

On Friday, Ukrainian Naval Forces Commander Serhiy Haiduk said that an issue of withdrawal of the Ukrainian troops from Crimea is not on the agenda so far.

“Today I am keeping in touch with all commanders, who stationed in Crimea, I clearly set tasks to the commanders depending on the situation that emerges, and the withdrawal of the troops from the Autonomous Republic of Crimea is not in question,” Haiduk said in the programme on Ukrainian television station Channel Five.

According to the ministry, as of March 21, out of more than 18,000 Ukrainian servicemen in Crimea, fewer than 2,000 had expressed the wish to leave for Ukraine.

Russian state flags were raised over 147 military units and organisations of Ukrainian armed forces deployed on the peninsula, the ministry said. Crimea: Whose land is this? Part 2

Is it fair for the US to expect unconditional obedience from Russia against its own national interests? 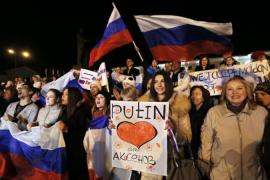 As Russia brings Crimea into the fold, those who helped oust Yanukovich-led government pledge to ‘get it back’.