Several men in civilian clothing, later joined by military-looking personnel believed to be Russian, have seized the Ukrainian naval headquarters in the Crimean port of Sevastopol.

A naval spokesman on Wednesday said there had been no violence during the takeover and he believed the men belonged to so-called “self-defence” units, mainly made up of volunteers who have supported Crimea’s transition from Ukrainian to Russian control, the Reuters news agency reported.

Dozens of despondent Ukrainian soldiers, one of them in tears, filed out of the base.

“We have been temporarily disbanded,” a Ukrainian lieutenant who identified himself only as Vlad told the AFP news agency.

“I was born here and I grew up here and I have been serving for 20 years,” he said as a Russian flag went up over the base without a single shot being fired in its defence. “Where am I going to go?”

Sergiy Gayduk, the Ukraine  navy commander appointed after his predecessor switched allegiance in favour of Crimea’s pro-Kremlin authorities at the start of the month, was detained.

Three Russian flags were later seen flying at one of the entrances to the base.

Oleksandr Turchynov said in a statement that “unless Admiral Gayduk and all the other hostages – both military and
civilian ones – are released, the authorities will carry out an adequate response … of a technical and technological nature.”

The AP news agency has reported that Ukrainian Defence Minister Ihor Tenyukh had been denied entry to Crimea.

Earlier, at a cabinet meeting in Kiev, acting Ukraine Prime Minister Arseniy Yatsenyuk had asked his first vice PM Vitaliy Yarema and Tenyukh to fly to Crimea immediately to de-escalate the crisis and try to prevent the conflict from turning into a military one. The officials immediately left for the airport.

Crimean Prime Minister Sergei Aksyonov responded on Wednesday by saying the officials would not be allowed to enter, Russian news agency Interfax reported.

“They are not wanted in Crimea. Nobody will let them into Crimea, they will be sent back,” Interfax quoted Aksyonov as saying.

The Crimean authorities do not recognise the government in Ukraine, while the parliament in Kiev does not accept Crimea’s referendum to join Russia was legal.

Al Jazeera’s Jennifer Glasse, reporting from inside the naval headquarters, said the group had decided to make its move after Ukrainian troops were told they could fire their weapons in self-defence.

“It has been a very tense situation for several weeks,” she said, adding that most of the weapons on the base were kept out of reach to avoid incidents.

“This morning not a single shot was fired.”

Ukrainian authorities issued the self-defence order following the death of a Ukrainian serviceman on Tuesday.

In western Crimea, other pro-Russian forces used a tractor to ram through the gate of a Ukrainian navy base, seizing control of the entrance, Ukraine’s defence ministry said on Wednesday.

“Russian soldiers” then halted their advance, ministry spokesman Vladislav Seleznev said on his Facebook page, adding that they were now in a standoff with armed Ukrainian troops at the base in Novoozerne.

It comes as Germany’s cabinet approved EU plans for closer political cooperation with Ukraine, a government source said, clearing the way for Chancellor Angela Merkel to sign part of a so-called association agreement at an EU summit later this week.

The 28-member bloc is expected to sign a more far-reaching trade accord with Ukraine later.

Pro-Russian Ukrainian President Viktor Yanukovich’s decision last November not to sign the association agreement with the EU provoked months of street protests that led to his fleeing the country.

Russia in turn accused Western states of violating a pledge to respect Ukraine’s sovereignty and political independence under a 1994 security assurance agreement, saying they had “indulged a coup d’etat” that ousted Yanukovich. 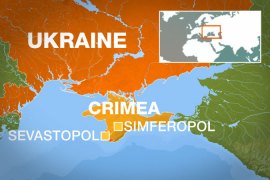