The European Union and United States have agreed to impose sanctions against Russian and Ukrainian officials deemed responsible for a contested independence referendum in Crimea, officials have said.

Lithuania’s Foreign Minister Linas Linkevicius said in a tweet on Monday that 21 officials would be targeted by travel bans and asset freezes, with “more EU measures in few days”.

The US has also imposed financial sanctions on 11 Russian and Ukrainian government officials and politicians, including two top advisers to Russian President Vladimir Putin and former Ukrainian President Viktor Yanukovich.

The list of officials who will see any property, assets and interests blocked in the US also includes Dmitry Rogozin, Russia’s deputy prime minister.

Washington says its sanctions targets those who “undermine democratic processes and institutions in Ukraine”.

Amid fears that Russia may move into eastern Ukraine where there is a significant Russian-speaking community, President Barack Obama warned that “further provocations” would only increase Moscow’s isolation and exact a greater toll on its economy.

“If Russia continues to interfere in Ukraine, we stand ready to impose further sanctions,” he said.

A senior US official said Obama’s order cleared the way to impose sanctions on people associated with the arms industry and targets “the personal wealth of cronies” of the Russian leadership.

France moved forward with cancelling a trip to Moscow by its Defence and Foreign Ministers that had been planned for Tuesday, ahead of the EU summit talks to be held in Brussels on Thursday and Friday, where the crisis in Ukraine is expected to top the agenda.

The list of those sanctioned by EU ministers will be released in the EU’s daily Official Journal, but diplomats said 13 were from Russia and 8 from Ukraine’s Crimea region.

They were targeted “for undermining the sovereignty of Ukraine”.

The ministers met after a referendum on Sunday showed an overwhelming majority in Crimea in favour of joining Russia, a vote the EU condemned as illegal and in violation of Moscow’s own international commitments to preserve the territorial integrity of Ukraine.

Crimea’s regional assembly declared independence from Ukraine after the referendum, and applied to join Russia, saying all Ukrainian state property on the peninsula would be nationalised.

“The republic of Crimea appeals to the United Nations and to all countries of the world to recognise it as an independent state,” read a document approved on Monday by the assembly.

It followed the announcement by introducing the Russian ruble as a second currency alongside the Ukrainian hyyvnia.

Crimea’s deputy prime minister also said the region has set up a new central bank and is expecting to get $30m in support from Russia.

Meanwhile in Kiev, Ukraine’s parliament approved the partial mobilisation of troops to counter “Russian interference” in the country.

A majority of deputies approved the motion, citing “the worsening political situation in the country… and Russia’s interference in Ukraine’s internal affairs”. 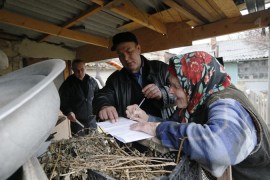 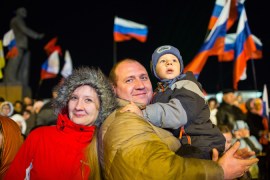 Region expected to formally ask to join Russia after nearly 97 percent voted in favour of the move, officials say.