Israel has reported fresh rocket attacks from Gaza and confirmed it has attacked sites within the occupied strip, as a claim by a Palestinian armed group of a deal to end the clashes apparently crumbled.

At least four rockets were reported by the Israeli military late on Thursday, hours after Israel said it carried out eight airstrikes inside Gaza near the Rafah area.

Al Jazeera’s Safwat al-Kahlout reported Gaza-based medics as saying three people were injured, one of them seriously, in those Israeli strikes.

That violence came after the Islamic Jihad movement, which has fired dozens of rockets into Israel in recent days, told Al Jazeera that it would abide by the terms of a ceasefire brokered by Egypt in 2012 from 12:00 GMT.

Khaled al-Batch, an Islamic Jihad leader in Gaza, told the AP news agency: “After the Egyptian brothers initiated contacts with us in the past few hours, we agreed to restore the calm.

“As long as the occupation [Israel] honors the calm, we will honor the calm and instructions are being given right now to al-Quds brigades, our military wing, about this understanding.”

Al Jazeera’s Kimberly Halkett, speaking in Washington, said the Israeli government was not commenting on the ceasefire.

The group said in a statement that its members were killed as they “resisted an Israeli military incursion” into Rafah.

Islamic Jihad said it has launched more than 90 rockets since Wednesday, the highest number since Israeli bombardments of the Gaza Strip in November 2012, in which more than a hundred Palestinians were killed.

The group said the rockets were a retaliation to Israel breaking a truce by killing three of its members on Tuesday.

United Nations Secretary General Ban Ki-moon called for restraint from all sides after the escalating violence.

“The Secretary-General strongly condemns the multiple rocket attacks today on Israel from Gaza, for which Islamic Jihad has claimed responsibility,” Ban’s press office said in a statement.

“While reports of damage and injuries are still being ascertained, (Ban) deplores the severe escalation of violence,” it said. 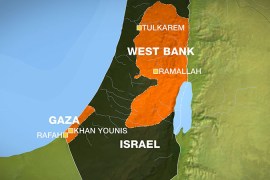 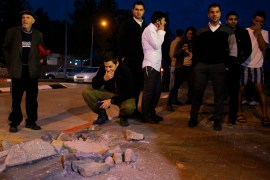 Islamic Jihad says its operation, “Breaking the Silence”, is a response to aggression by Israeli military. 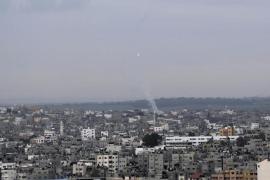 Bases of Hamas and armed wing of Islamic Jihad targeted following most intense barrage since 2012 conflict.