China will not give up the search for the missing Malaysian Airlines flight, MH370, “as long as there is a glimmer of hope”, its premier has said.

Of the 239 passengers on the aircraft, which vanished without trace on Saturday, 153 were Chinese citizens.

Premier Li Keqiang told a news conference on Thursday: “Those people’s families and friends are burning with anxiety. The Chinese government and the Chinese people are all deeply concerned about their safety. We are all eagerly awaiting news about the plane, even the slightest piece of good news.”

China had eight ships taking part in the search efforts, with a ninth on its way, and had deployed 10 satellites, he said.

“We will not give up on any suspected clue that has been found,” Li said, after the end of the annual session of the National People’s Congress.

His remarks came as the Wall Street Journal reported that the aircraft remained airborne for hours after its disappearance from radars.

The US paper said that aviation investigators and national security officials believed the plane flew for a total of five hours based on data automatically downloaded and sent to the ground from the Boeing 777’s engines, as part of a routine maintenance and monitoring programme.

The plane was heading east over the South China Sea when it disappeared, but authorities believe it may have turned back and headed into the upper reaches of the Malacca Strait or beyond.

The hunt for MH370 has been punctuated by false leads since it vanished hours after leaving the Malaysian capital Kuala Lumpur for Beijing early on Saturday.

Malaysia’s civil aviation chief said no signs of the missing Malaysian aircraft MH370 had been found at a location where Chinese satellite images showed what was thought to be plane debris floating in the South China Sea.

Datuk Azharuddin Abdul Rahman said planes searched the location on Thursday. “There is nothing. We went there, there is nothing,” he told reporters in Kuala Lumpur.

On Thursday Malaysia Airlines said it had retired the missing aircraft’s flight code as a sign of respect to the passengers and crew on board.

MH370 was used for the Kuala Lumpur-Beijing route and MH371 for a return flight but, from Friday, Malaysia Airlines will instead use flight codes MH318 and MH319 for the same route. 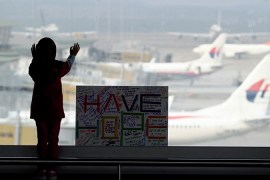 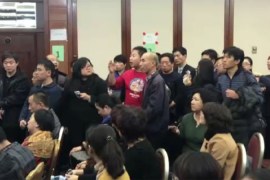 Passengers’ families are increasingly angry about the lack of information surrounding the missing Malaysian airliner. 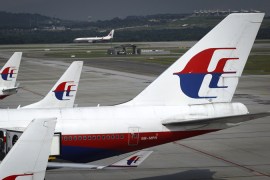