India’s Supreme Court has commuted the death sentences of three men convicted of killing former prime minister Rajiv Gandhi, media reports say. The three have been sentenced to life in prison instead.

Private television channel NDTV on Tuesday said a bench of judges headed by Chief Justice P Sathasivam granted the three convicts mercy, despite the federal government’s argument that they did not deserve it.

The three – Santhan, Murugan and Perarivalan – had earlier appealed against their death sentences, arguing there had been an exceptional delay in dealing with their mercy pleas.

Gandhi was killed by a bomb attack during an election rally in 1991. The killing was carried out by the Sri Lankan LTTE and the three were convicted in 1998.

Last month, the Supreme Court commuted the death sentences of 15 convicts, announcing that “inordinate and inexplicable” delays in carrying out executions were grounds for reducing their original punishment.

The judgement was delivered by a bench headed by Chief Justice P Sathasivam.

Balbir Punj, a leader of India’s main opposition, Bharatiya Janata Party, said it is a historic judgement but it should not have taken so long for it to be delivered.

“One should not comment on the matter when the Supreme Court has given its verdict. But the unfortunate incident of the killing of Rajiv Gandhi took place nearly 25 years ago and it is very sad that our legal system could not punish them and it is being still discussed and the judgement is coming now,” said Punj.

Earlier, when the judgment was pronounced, a lawyer representing Rajiv Gandhi’s assassins, Yug Chaudary, said that the landmark verdict has boosted the campaign for the abolition of death penalty.

Rajiv Gandhi was killed by a suicide bomber at an election rally in Sriperumbedur on May 21, 1991. Fourteen other people also lost their lives in that blast.

In 1999, the three convicts – Santhan, Murugan and Perarivalan – were sentenced to death by the Supreme Court for being part of the group that conspired to kill Gandhi.

Their mercy petition was sent to the President of India, the last stage in the process of appeals, in 2000 and was rejected 11 years later. Their hanging was stayed in 2011 on the orders of the Madras High Court.

BS Gnanadesikan, the president of the Tamil Nadu Congress Committee, said that the mercy petition itself was proof that the three accused were indeed guilty of the crime.

“The mercy petition itself shows that the three accused persons were actual culprits but at the same time they want a mercy from the government.” said Gnanadesikan.

Chief of India’s regional People’s Democratic Party (PDP), Mehbooba Mufti, said the apex court verdict on the basis of a delay in justice was unjustified, as when Afzal Guru was hanged, there were no such considerations.

“The Supreme Court has given this verdict on the basis that it has been delayed for a long time. But I wish the same was done in other cases,” said Mufti. 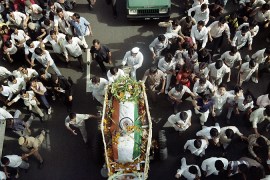