Fierce clashes between police and protesters in Ukraine’s capital have erupted anew and news agencies are reporting their journalists have seen bodies laid out on the edge of the protest encampment.

An Associated Press journalist said he had seen 10 bodies. Fifteen bodies were lying on the ground covered by blankets on or near Kiev’s Independence Square, a Reuters photographer at the scene said

As the violence exploded and heavy smoke from burning barricades at the encampment belched into the sky, the foreign ministers of three European countries were meeting with President Viktor Yanukovich, according to a presidential aide.

Ukraine’s president had offered a truce and talks with the opposition and replaced the head of the army after a night of protests in Kiev on Wednesday left 26 dead and up to 200 people injured.

A statement on the presidential website announced an agreement for “the start to negotiations with the aim of ending bloodshed, and stabilising the situation in the state in the interests of social peace”.

Yanukovich, who is backed by Russia, has denounced the bloodshed in central Kiev, where protesters have been dug in for almost three months since he spurned a trade deal with the EU in favour of closer Russian ties, as an attempted coup.

Separately, his security service said it had launched a nationwide “anti-terrorist operation” after arms and ammunition dumps were looted.

The violence, the worst since Ukraine’s independence from the Soviet Union 22 years ago, provoked condemnation from Europe and the US and protests from Russia.

The US imposed a travel ban on some Ukrainian officials on Wednesday.

Speaking from Toluca, Mexico, where he was attending the North American Leaders Summit, US President Barack Obama called on Ukraine’s armed forces to stay out of the political crisis and warned that there would be consequences for those who “step over the line”.

He condemned the violence and put the onus on Ukraine’s government to reach a peaceful resolution.

Meanwhile, EU ambassadors discussed a series of possible steps including asset freezes and travel bans in talks on Wednesday.

While EU officials said they were considering targeted sanctions for the “unjustified use of excessive force by the Ukrainian authorities”, they said Yanukovich himself would be excluded from such measures, in order to keep channels of dialogue open.

Beside asset freezes and visa bans, ministers were expected to discuss measures to stop riot gear and other equipment being exported to Ukraine and could consider arms restrictions.

Earlier on Wednesday, Colonel Steve Warren, a Pentagon spokesman, told the Ukrainian armed forces that “participation [in the political unrest] would have consequences in our defence relationship”.

The warning came as Yanukovich announced that Yuri Iliin would replace Volodymyr Zamana as Ukraine’s army chief, but provided no explanation for the decision.

Zamana was known to have publicly disagreed with Yanukovich at the start of the month when the president first considered imposing a state of emergency.

Zamana said on February 1 that “no one had the right to use the armed forces to restrict the rights of citizens” – a statement that won him wide praise in the protest movement.

Iliin, reportedly a Belarusian, had until now served as the head of Ukraine’s navy. He is viewed as a strong Yanukovich loyalist.

Al Jazeera’s Andrew Simmons, reporting from Kiev, said Iliin is considered a more hardline option and that local news media are suggesting that his appointment was in preparation for military action against the protesters.

Ukraine, a country of 46 million with a weak economy and endemic corruption, is the object of a tug-of-war at a global level between Russia and the West. 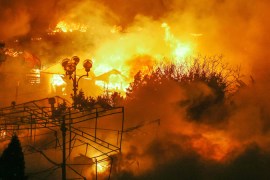 After weeks of relative calm, Ukraine’s capital exploded in violence as security forces moved against protesters. 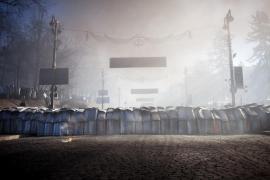 Twenty-five people were killed in a crackdown on the anti-government protest movement. 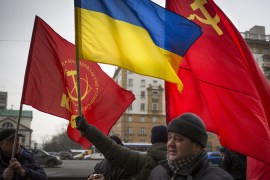 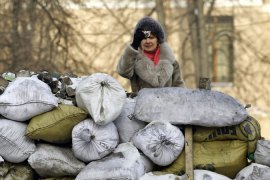