Clashes between police and opposition protesters left four dead and dozens wounded in central Bangkok, as anti-fraud officials announced that the country’s embattled prime minister will be charged with neglect of duty.

The National Anti-Corruption Commission said on Tuesday that if found guilty of the charges – which relate to a controversial rice subsidy scheme – Prime Minister Yingluck Shinawatra could be removed from office.

The announcement came hours after gunfire and explosions shook an area of the city’s historic district just a short walk away from major tourist attractions, with riot police moving to clear sites of protest rallies.

Tear gas was also fired near Government House in the centre of Bangkok, a Reuters news agency witness reported, as thousands of police officers, including anti-riot squads, were deployed across the city in an operation the government called “Peace for Bangkok”.

“One policeman has died and 14 police were injured,” national police chief Adul Saengsingkaew told Reuters. “The policeman died while being sent to hospital. He was shot in the head.”

We saw demonstrators throwing rubble, rocks, bottles, anything that they could lay their hands on at the police riot shields.

Al Jazeera’s Veronica Pedrosa, reporting from Bangkok, said that when police attempted to clear the area with bulldozers and ranks of police, they were met with resistance.

Pedrosa reported that there was a large explosion which was reportedly a M79 grenade as well as several smaller explosions. “At that point, police fired back apparently using with rubber-coated steel bullets and handguns,” she said. “We saw demonstrators throwing rubble, rocks, bottles, anything that they could lay their hands on at the police riot shields,” she added.

The Associated Press reported that Erawan emergency medical services said at least 42 people were injured. It was not immediately known if they were protesters or police.

Protesters are calling for Yingluck to resign and make way for an unelected people’s council to implement reforms they say are needed to end corruption.

The protesters had reinforced the numbers around Government House to keep Yingluck from returning to work there. The caretaker leader has dissolved the parliament and had been forced to work at the temporary office in Bangkok’s suburbs after protesters surrounded her office in central Bangkok demanding her resignation.

Since the protesters started blocking government offices late last year and major intersections a month ago, police have avoided dispersing demonstrators for fear of unleashing violence.

But on Monday, the government’s special security command centre announced it would reclaim five protest sites around the city for public use, a move made possible under a state of emergency declared in January.

Protest leader Rawee Matchamadon said that police rounded up about 100 demonstrators outside the Energy Ministry, north of the city, and took them away in police trucks for questioning at a police base in Bangkok’s northern outskirts on Tuesday. Live video on Tnews cable television showed no resistance from the protesters during the operation early on Tuesday morning.

The recent police operations conducted raises fears of further chances of violent outbursts. In previous weeks of protests, at least 10 people have been killed and scores injured.

At another operation site near the Golden Mount, a temple on a hill, anti-riot police moved in to round up more anti-government protesters and used bulldozers to clear out a makeshift stage. Gunshots were heard during the operation and a police officer was seen injured on a live television report on FMTV cable channel.

Near Government House, police officers were asking protesters to leave.

“It is necessary for the police to return peace to the society and unblock the road in order to let the students go to school,” a policeman said through a loudspeaker. “We beg you not to do against the law or defy our operation.”

Caretaker Transport Minister Chadchart Sittipunt told Associated Press the protesters hijacked two of the city’s public buses and used them to block a rally site at the Interior Ministry near the Grand Palace.

Thailand has been wracked by political unrest since 2006, when Yingluck’s brother, former Prime Minister Thaksin Shinawatra, was ousted by a military coup after being accused of corruption and abuse of power. Since then, his supporters and opponents have vied for power. 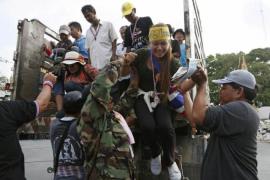 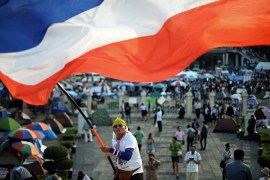 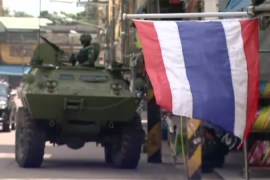 Lack of financial support has forced locals and farmers in the south to join anti-government protests.