A Venezuelan opposition leader who has spearheaded days of protests against the government has released a new video, calling for a peaceful demonstration on Tuesday.

Leopoldo Lopez’s pledge to surrender after staging one more demonstration came after hundreds of people gathered peacefully in the capital, Caracas, for a fifth day of protests against rising inflation, food shortages and rising crime.

The protesters said on Sunday they would stay in the streets until President Nicolas Maduro disarmed pro-government militias, AFP news agency reported.

For his part, Maduro said he was ordering the expulsion of three US consular officials.

He did not identify the officials but accused them in a televised speech on Sunday night of infiltrating Venezuelan universities under the cover of doing consular work involving student visas.

There was no immediate reaction from the US government, which has denied the accusations that it is plotting with the opposition against him. The US has not had an ambassador in Caracas since 2010.

“The protesters are claiming that they will be taking to the streets every day,” she said.

“What they really want is for this government to step down. They don’t explain how but they want a political change. But that is very unlikely to happen.

“The only way to legally oust him is to hold a referendum, which can’t happen for another two years according to the Venezuelan constitution.”

Sunday’s protests came as Henrique Capriles, an opposition leader and former presidential candidate, accused Maduro of using rhetoric over recent violence to distract the public from other problems facing Venezuela.

“Don’t try to cover up with disturbances the serious problems that our Venezuela is living with. Don’t distract us or try to get us involved because there is a deep unhappiness in our country. It exists. You know that,” he said in Caracas.

Some prominent leaders have backed the students but Capriles, who narrowly lost to Maduro in last year’s election, has given warning that now is not the time to try and force the government out of power.

Saturday’s competing pro- and anti-government protests ended in clashes, wrapping up a week that has seen several deadly street protests and an arrest warrant issued for Lopez.

Three people were killed on Wednesday when an opposition demonstration turned violent, setting off days of clashes in the streets between protesters and security forces.

The government of Maduro has accused right-wing infiltrators of fomenting the violence. But leaders of the student movement blamed groups of hooded assailants backed by the government.

In Sunday’s video, shot in an undisclosed location and posted on his Twitter account, Lopez says he does not fear arrest but accuses the authorities of trying to violate his constitutional right to protest against Maduro’s government.

“I will be there showing my face, I have nothing to fear,” he says. “If there is any illegal decision to jail me, then I will accept that decision and that infamous persecution by the state.”

Lopez urged supporters to gather in white shirts and march peacefully with him on Tuesday to the Interior Ministry, where he said he would deliver a petition demanding a full investigation of the government’s role in Wednesday’s violence.

For his part, Miguel Rodriguez Torres, the interior minister, said Lopez would have his rights “guaranteed”. He said Lopez has “his human rights, and all the rights that are in the constitution, they are guaranteed as a citizen of this country, like all citizens”.

However, the homes of Lopez and his parents were raided by security forces on Sunday. Video footage distributed by the opposition Voluntad Publica party showed images of federal forces outside the home of his parents.

Neighbours banged on pots and pans to protest against what they considered an arbitrary detention order.

Venezuela, an oil exporter, has been mired in a deepening economic crisis that critics blame on Maduro’s policies.

Strict controls on currency and prices have created huge bottlenecks that have worsened inflation and emptied store shelves.

Maduro has accused right-wing interests and speculators of waging an “economic war” against the country. 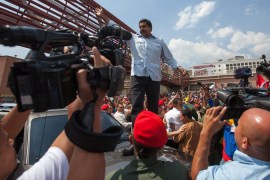 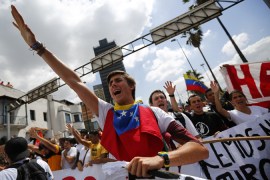 At least four killed, including a police officer, as thousands gather in capital to demand president’s resignation. 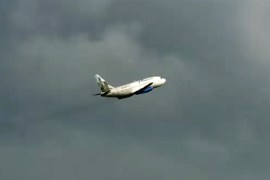 Travellers cash in on Venezuela plan

Both locals and foreigners using loophole in local-currency laws to secure cheap flights around the world. 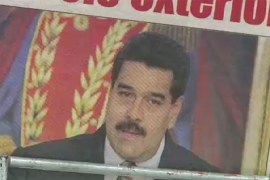 Venezuela tries to shore up economy