Peace talks between the Syrian government and opposition are not making much progress, the international mediator has acknowledged after a face-to-face meeting of the rival parties in Geneva.

Negotiations intended to end Syria’s three-year-old civil war began with a week-long session last month and have resumed this week in the Swiss city which hosts the UN’s European headquarters.

There had been hopes for Tuesday’s talks after they began with a minute’s silence for the 130,000 people killed since the conflict began.

But Lakhdar Brahimi, the UN-Arab League envoy, said the second round of “Geneva 2” so far was as “laborious” as the first.

“We are not making much progress,” he said. The absence of breakthrough coincided with more reports of bombs being dropped on the rebel-held city of Aleppo.

In an attempt to break the deadlock, Brahimi had proposed that they use Tuesday to discuss ending the violence and Wednesday to raise formation of a transitional governing body.

The talks have been held up over the agenda, with the opposition wanting first to discuss plans for a transitional government, and President Bashar al-Assad’s government insisting the first issue must be fighting terrorism – a word it uses for all armed rebels.

Both sides said on Tuesday that the agenda had still not been agreed on.

“Today was another lost day because the representatives of the Coalition insisted that there is no terrorism in Syria,” Faisal Maqdad, Syria’s deputy foreign minister, said in Geneva.

Bouthaina Shaaban, a senior Assad aide, criticised the opposition representatives for refusing to “acknowledge that there is terrorism in Syria”.

“The only thing they want to discuss is the transitional government,” she told AFP news agency.

In Damascus, Ali Haidar, Syria’s reconciliation minister, said: “I think Geneva under the current circumstances will end in failure.”

Louay Safi, the opposition National Coalition spokesman, said: “It is obvious the regime is stalling and still believes in a military solution.”

So far, the only tangible result of the Geneva negotiations has been an agreement to allow aid to enter and people to leave the Old City of Homs, under government siege for more than a year.

While hailing the Homs operation, Brahimi said it was only a small step and “nothing has happened” in a host of other besieged communities.

Even then, the evacuation operations were suspended later on Tuesday, with local authorities citing “logistical and technical reasons”.

Talal Barzai, the governor of Homs, said the aid mission would resume on Wednesday.

He said that other routes in and out of the city were being studied for the safety of the UN team and the evacuees they were helping.

Barzai also told Al Jazeera that the government was willing to extend the ceasefire beyond its Wednesday evening deadline as long as civilians wanted to be evacuated and aid needed to reach them.

Melissa Fleming, spokeswoman for the UN refugee agency, said that 336 male evacuees had been taken in by Syrian authorities for questioning.

Those held, deemed to be of fighting age by the authorities, were among 1,151 who left the Old City during a ceasefire extended for a second three-day period on Monday.

Afterwards, aid workers were able to speak to the men, who said they wanted to be allowed to join the women and children already evacuated.

The regime has said men must be interrogated in order to weed out “terrorists”, but the opposition raised fears that separating men from women and children could be a tactic to detain them.

The UN said 41 of the men had been released, while Barzai put the number at 100.

The rest were being questioned in a school, under the “general monitoring” of UN staff, a UN spokeswoman said.

Of five heavily pregnant women evacuated, one had since given birth. Those leaving were very weak, with signs of malnutrition, a World Food Programme spokeswoman said.

Survivors recounted a daily diet that included leaves and grass.

Against this backdrop, the UN Security Council began debating on Tuesday a Western-Arab draft resolution that would demand humanitarian aid access to besieged Syrian areas, a text Russia has dismissed as “detached from reality”.

The text was prepared by Australia, Luxembourg and Jordan, whose envoys presented their draft resolution meant to increase aid to Syria to the full 15-nation Security Council.

Last week the countries had submitted it to the council’s five permanent, veto-wielding members, including Russia, but the Russians rejected the proposal as a non-starter.

“We had a good exchange on the challenges of the humanitarian situation,” Vitaly Churkin, Russia’s UN ambassador, said after the meeting, without giving details.

Gerard Araud, the French ambassador, said Churkin told the Security Council that Russia was prepared to work on some kind of resolution on aid, but not the present draft.

He also said it was unclear when the UN body would vote on the text, adding that negotiations have only just begun.

Several diplomats said a vote was unlikely before next week given Russia’s dismissive initial reaction and concerns about upsetting the negotiations process in Geneva further.

Also on Tuesday. at a US Senate hearing in Washington DC, James Clapper, the National Intelligence director, said he was convinced that documents alleging torture and murder in the Syria conflict were authentic.

He was asked during the hearing whether he had seen the documents, published by the international news media, as potential proof of atrocities by Syria’s government. He said he had, and that he believed they were real.

“They’re terrible. And when you consider the humanitarian disaster in addition to the 2.5 million refugees, the 6.5 million or seven million that are internally displaced, the 134,000 plus people that have been killed, it is an apocalyptic disaster,” Clapper said. 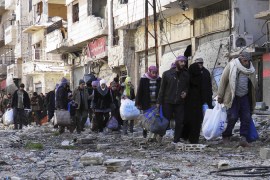 As relief arrives in the besieged city and some people are allowed out, we ask what it means for the conflict. 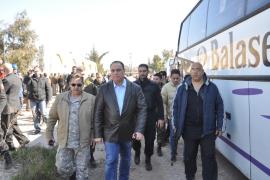 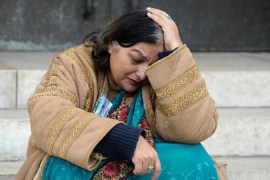 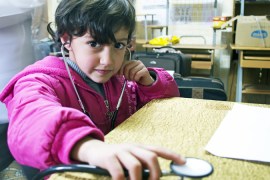