Another Sierra Leone doctor has died from Ebola, the 10th to succumb to the disease, according to a health official.

Konoyeima worked at a children’s hospital in the capital Freetown and tested positive for Ebola about two weeks ago.

He was treated at the Hastings Ebola Treatment Centre, which is staffed exclusively by Sierra Leone medical personnel, as compared to many other treatment units, which are run by international organisations or employ some foreign staff.

Because Ebola is transmitted through the bodily fluids of the sick and dead, it is sometimes called the “caretakers’ disease”.

Hundreds of health workers have been infected in this outbreak, including some who came from outside Africa.

Among them was a Cuban doctor who returned home to his family on Saturday after being successfully treated for Ebola at a Swiss hospital.

Felix Baez Sarria contracted Ebola while working with a Cuban government medical team in Sierra Leone and was flown to Geneva for treatment on November 20. He got infected when he rushed to help a patient who was falling over.

Speaking at Havana’s international airport, Baez Sarria said he was “very grateful” to all those who took care of him.

The Geneva University Hospital said on Saturday that tests this week showed Baez Sarria was cured.

In another Ebola-related development, the African Union has launched a new text-message campaign an effort to raise funds.

People are being encouraged to text “Stop Ebola”. Each text costs around $1, and the money is meant to go towards combating the virus.

People across the continent can now contribute to the Ebola fund by simply sending a text message to donate.

“It’s a service where customers can simply send an SMS message to 7979 with the words ‘Stop Ebola’ and then they would make a donation of 100 naira and all of that money, with no deductions, will go to the African Union fund to eradicate Ebola,” said Matthew Wilshere, CEO of Etisalat, a multinational telecommunication carrier.

The African Union Commission has so far raised more than $20m in donations through its hashtag “#AfricaAgainstEbola” campaign, but its chairperson says more is still needed.

In the current outbreak, Ebola has infected more than 17,500 people, mostly in Guinea, Liberia and Sierra Leone.

Of those, about 6,200 have died. It is currently spreading fastest in Sierra Leone. 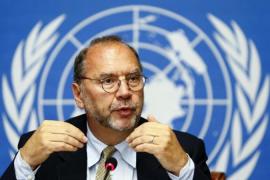 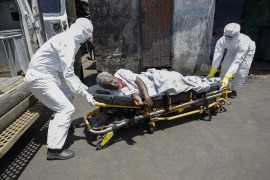 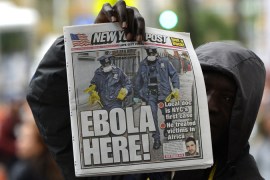 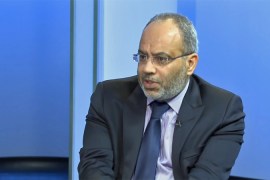 The executive secretary of the United Nations Economic Commission for Africa discusses a new UNECA report on Ebola.