The International Criminal Court has withdrawn charges of crimes against humanity against Kenyan President Uhuru Kenyatta.

Fatou Bensouda, ICC prosecutor, filed a three-paragraph notice withdrawing the charges against Kenyatta but added that she reserved the right to file charges again should she get more evidence.

“The evidence has not improved to such an extent that Mr Kenyatta’s alleged criminal responsibility can be proven beyond reasonable doubt,” Bensouda said on Friday in a document filed at the Hague-based court.

Fergal Gaynor, the lawyer representing the victims, told Al Jazeera the Kenyan government had done their utmost to obstruct the case.

“Frankly the victims have been trying to get justice in Kenya, and failed. They tried to get justice from the ICC, and they failed. It is a sad day for them,” he said.

Prosecutors have repeatedly complained that Kenya has blocked their case by not cooperating in their investigation. Judges at the court this week also said Kenya’s cooperation “falls short of the standard of good faith cooperation”.

In a written statement, Bensouda said the lack of cooperation had a “severe impact” on the case.

“It has deprived the victims of their right to know the full account of what transpired in 2007-2008,” she said.

“It has further undermined my ability to carry out a full investigation. And finally, it has prevented the Judges from carrying out their critical functions of assessing the evidence and determining the truth.”

Kenyatta faced crimes-against-humanity charges for allegations that he helped instigate violence that followed Kenya’s December 2007 presidential election, when more than 1,000 people were killed.

The decision comes after his lawyer on Wednesday called for the judges to drop the charges and acquit his client while Kenyatta himself said prosecutors had “nothing” on him. 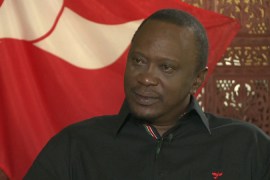 Uhuru Kenyatta: ‘Not a banana republic’

Despite facing charges of crimes against humanity, Kenya’s deputy prime minister says he will run for office.