An AirAsia plane that went missing with 162 people on board after takeoff from Indonesia is probably at the bottom of the sea, Indonesia’s National Search and Rescue Agency chief has said.

The statement on Monday came as ships and helicopters scoured the Java Sea for signs of wreckage from the plane that went missing a day earlier soon after take off. An Indonesian helicopter reported spotting two oily spots in the water while an Australian search plane claimed seeing some objects elsewhere.

It was, however, too early to know whether either sighting was connected to the missing aircraft.

“Based on the coordinates given to us and evaluation that the estimated crash position is in the sea, the hypothesis is the plane is at the bottom of the sea,” Henry Bambang Soelistyo, Indonesia’s National Search and Rescue Agency chief told reporters.

“That’s the preliminary suspicion and it can develop based on the evaluation of the result of our search.”

First Admiral Sigit Setiayana, the Naval Aviation Center Commander at the Surabaya air force base, said that 12 navy ships, five planes, three helicopters and a number of warships were searching an area of east and southeast of Indonesia’s Belitung island and nearby waters.

Malaysia, Singapore and Australia have joined the operation.

Al Jazeera’s Scott Heidler, reporting from Surabaya, said that Australia had deployed sophisticated surveillance aircraft in the multinational search over the Java Sea.

Singapore offered to provide “underwater assistance” which our correspondent said would be in the form of underwater vehicles as well as personnel.

The search teams are combing through an area of 200km radius.

The Airbus A320-200 went missing after air traffic controllers lost contact with the aircraft about 45 minutes after it left Juanda international airport at Surabaya in East Java at 5:20am on Sunday (22:20 GMT Saturday).

Shortly before disappearing, AirAsia said pilots of the plane had asked permission from Jakarta air traffic control to change course and climb above bad weather in an area noted for severe thunderstorms.

Our correspondent said that investigators were checking all passenger profiles and footage of X-rays of the luggage taken on board, as well as looking into the maintenance of the plane.

The plane is in good condition but the weather is not so good.


“There are also reports that some fishermen might have heard something before the news that the plane had disappeared off radar came out,” he said.

The airline said 155 of those on board Flight QZ8501 were Indonesians, with three South Koreans and one person each from Singapore, Malaysia, Britain and France.

The aircraft was operated by AirAsia Indonesia, a unit of Malaysian-based AirAsia which dominates Southeast Asia’s booming low-cost airline market.

“The plane is in good condition but the weather is not so good,” Djoko Murjatmodjo told a press conference at Jakarta’s airport, addressing reports of severe storms in the area where the jet went missing.

An official from Indonesia’s Transport Ministry said the pilot asked to ascend by 6,000 feet to 38,000 feet to avoid heavy clouds.

Climbing to dodge large rain clouds is a standard procedure for aircraft in these conditions. 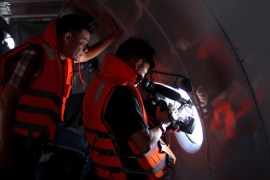 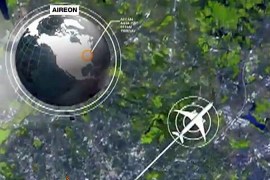