Japan’s space agency has launched an ambitious space mission which aims to mine an asteroid and hunt for clues about the birth of the solar system.

About the size of a fridge, and fitted with an explosive bullet, Japan’s asteroid-hunting spacecraft embarked on a six-year space mission on Wednesday.

Building on a previous mission, which managed to bring rock fragments from another asteroid back to Earth in 2010, this time Hayabusa2 aims to do more.

“That makes a jet that goes extremely fast about 30-40km/s,” said Dr Francisco Diego, from University College London. “Although the mass of this gas is very very low, it produces a little bit of a push in a very  efficient way and that’s enough to steer the spacecraft along the orbit.”

Hayabusa2 has a long way to go: more than 5 billion kilometres.

For the next two and a half years it will play catch-up with asteroid 1999 JU3. The asteroid is one of many that orbit the Sun, mainly between Earth and Mars. Once Hayabusa2 arrives, it will spend 18 months studying the asteroid.

Experiments include dropping tiny rover robots onto the surface to make scientific tests of the structure and chemical make-up of the asteroid.

The most ambitious part of the mission involves firing a high-speed explosive bullet into the asteroid’s crust.

When that process is completed, Hayabusa2 will begin a year-long journey back to Earth, where it is hoped to arrive in 2020.

Scientists say the rock from inside the asteroid will be less weathered by the space environment and by heat. They hope these rocks will answer some fundamental questions about the early stages of the formation of the solar system, how Earth evolved, and where the Earth’s oceans may have formed. 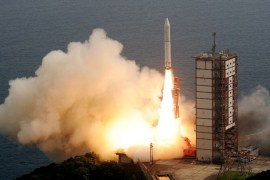